When Numbers Mean Nothing 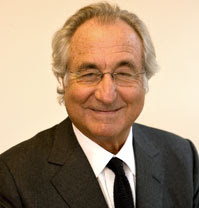 What a year it has been - for getting acquainted with numbers, big numbers. First Nobel Prize winning economist Joseph Stiglitz ran the real numbers of the "$60-billion" war in Iraq and it tallied up to nearly three trillion dollars.

Then came the multi-trillion dollar US housing bubble collapse although it'll be at least a year, likely two or more before we can even get a figure on that.

Then there was the trillion dollar plus Wall Street bailouts and buyouts and a like amount that's being loaned to US banks on the quiet.

Along comes the motor industry looking for what is, by contrast, a fairly meagre bailout in the range of $30-billion. Three million jobs at stake there. That has truly ballistic properties.

But, to put it all in some perspective you have to look at Wall Street trader Bernie Madoff, a former chairman of Nasdaq. This guy was the fabled genius who ran his own investment firm aptly named Bernard L. Madoff where investors in the know, including a raft of Jewish charities, looking for consistently high returns invested their cash. It was a relatively small outfit with a big name.

"...on Thursday, Madoff was charged with securities fraud after confessing to his sons that his business was a Ponzi scheme, according to a complaint filed by the Securities and Exchange Commission. The returns paid to investors came from money invested by other people. And there was almost nothing left.

It may be the largest fraud in the history of Wall Street, authorities said. Madoff is charged with stealing as much as $50 billion, in part to cover a pattern of massive losses, even as he cultivated a reputation as a financial mastermind and prominent philanthropist."

50-billion dollars. One man. Detroit would be happy with half that and is likely to get even less. We'll have to wait to find out just what motivated Bernie to go from Wall Street whiz to fraud artist.

I've been involved in this sort of larceny before involving lawyers here in British Columbia. I digested a study conducted by the American Bar Association that uncovered a remarkably consistent pattern in cases where lawyers raid the trust accounts of their clients.

In most instances the lawyer intends to just borrow that money, either to get himself out of a jam or to take advantage of a deal that's too good to pass up. They break the taboo believing they'll restore the trust funds before anyone notices, no one will be harmed and none the wiser. Yet these deals never seem to work out and, once the taboo against touching client funds is broken, it's shattered. That leads to a pattern of theft-by-borrowing that becomes steadily desperate until it can no longer be concealed.

What's remarkable is how many of these types never seem to personally benefit from their larceny. The money they've stolen becomes their stake for gambling and high-risk investing. Often the guy winds up broke with a serious substance abuse problem, utterly washed up.

I wonder if that'll be the story of Bernie Madoff.
Posted by The Mound of Sound at 7:51 AM

Email ThisBlogThis!Share to TwitterShare to FacebookShare to Pinterest
Labels: Madoff, theft, US meltdown