Does Anybody Know Just What We Bought for 75-Billion? 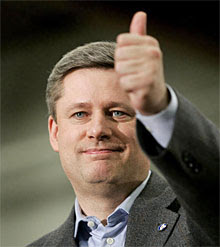 Stephen Harper took 75-billion dollars of taxpayer money and gave it to the banks to improve their liquidity. We're told that he used that money to buy good mortgages of equal value.
Does anybody know what we actually bought with that pot of gold?

What mortgages did the banks unload? Were they conventional, well collatoralized mortgages or were they Harper/Flaherty 40-year term/zero equity subprimes, the sort that are probably now well into negative-equity range?

I guess what I'm asking is, did we just fork over $75-billion of taxpayer money to dryclean Harper's and Flaherty's pants? Was that money used to cover up the Harper Tories' reckless adventurism?
If my hunch is right, we've got a 75-billion dollar scandal on our hands.
Posted by The Mound of Sound at 11:26 AM

God but does this blog blow...

Do you really think the banks would sell us the good stuff? Nope. We bought the high ratio mortgages.

Some of the treasury bills we used came from the stash used to back our cash money supply.

So, yes, our money, in part, moved from being based upon very secure treasury bills, to far less secure high ratio mortgages.

Keep in mind that the high ratio mortgages were introduced into Canada in the Conservative's first budget. So the Cons authored the Canadian real estate bubble, destabilized our currency, and "invested" nearly $100 billion in private banks. Meanwhile other needed investments, such as co-op housing, green infrastructure and transit (to name a few) keep drips of cash compared (at best).

Yeah, Mark, I've been reading Turner's stuff but I've not seen anything that ties the bailout funds to the 40/zero mortgages. To the contrary, Harper went to greeat pains to assure Canadians that the securities we bought with that 75-billion were sound mortgages, not ticking time bombs.

Thanks Mark for that link. So, it is true. Harper and Flaherty, perhaps being squeezed by the Chartered Banks,mopped up the mess that they left in their 2006 budget with voodoo mortgages, using 75-billion tax dollars of good assets to buy badf assets of their own making.

First Harper defunds the government then he goes on to sabotage its core fiscal strength to cover up his very own political mess.

And, thanks to an inept, gullible GG, the opposition can't even air
this Seventy-five billion dollar political boondoggle on the floor of the House!

I wonder what the government is going to do when the inevitable foreclosures begin?

This is totally monstrous!

"To the contrary, Harper went to greeat pains to assure Canadians that the securities we bought with that 75-billion were sound mortgages, not ticking time bombs."

Could be... but we are also dealing with a government which produced an economic update based upon unverifiable projections. The tricks used in that document were the same used in Ontario in Ernie Eves last budget -- a budget Eves claimed was balanced, but was actually in a deficit state. The trick was to violate standard accounting practices and to predict savings from spending cuts without even knowing what could be cut, and to predict income based upon asset sales, without even knowing what assets could be sold or for how much. Same trick has been used here. It is dishonest.

The independent Parliamentary budget office has been after the underlying numbers, but has been stonewalled by the government. I am not feeling reassured. I'm sure the market isn't either.

Harper is now trying to bury all that by claiming that the economic situation has changed.

No, the update was dishonest.

So, I don't believe anything Harper says. His assurances are empty.

We are entitled to know exactly what we have bought. I look forward to hearing more about this in the House... if it were open.

I agree Mark. If we had to pillage Bank of Canada AAA assets to buy back Harper/Flaherty boondoggle mortgages, that's a rank coverup.

Anon 3:03, that's a load of nonsense but I'm sure you know that. Authorizing these 40/zero mortgages as America's own housing bubble (the then engine of its economy) was nearing the bursting point was utterly irresponsible and vastly damaging to the fiscal strength of the federal government.