We're Blind To the Real Enemy in Afghanistan 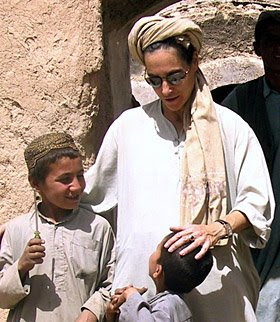 When it comes to Afghanistan, there are few reliable experts and, no, that select few doesn't include any Canadian generals. It does include Sarah Chayes, a former NPR reporter who chose to stay there to aid the recovery effort, establishing her own women's business.

Ask Sarah Chayes why we can't win in Afghanistan and she'll tell you the main reason is because of the very thugs we've installed to govern the country. Chayes just wrote an op-ed piece from her home in Kandahar City for the Washington Post. Here are a few excerpts:

In the seven years I've lived in this stronghold of the Afghan south -- the erstwhile capital of the Taliban and the focus of their renewed assault on the country -- most of my conversations with locals about what's going wrong have centered on corruption and abuse of power. "More than roads, more than schools or wells or electricity, we need good governance," said Nurallah during yet another discussion a couple of weeks ago.

He had put his finger on the heart of the problem. We and our friends in Kandahar are thunderstruck at recent suggestions that the solution to the hair-raising situation in this country must include a political settlement with "relevant parties" -- read, the Taliban. Negotiating with them wouldn't solve Afghanistan's problems; it would only exacerbate them. Ask any Afghan what's really needed, what would render the Taliban irrelevant, and they'll tell you: improving the behavior of the officials whom the United States and its allies ushered into power after the Sept. 11, 2001, terrorist attacks.


...Afghans remember the reign in the 1960s and '70s of King Zahir Shah and his cousin Daoud Khan, when Afghan cities were among the most developed and cosmopolitan in the Muslim world, when Peace Corps volunteers conducted vaccination campaigns on foot through a welcoming countryside, and when, my friends here tell me, a lone, unarmed policeman could detain a criminal suspect in a far-flung village without obstruction. Kandaharis -- even those who lost a brother or father in the 1980s war against Soviet occupation -- praise the communist-backed government of former president Najibullah. "His officials weren't building marble-clad mansions with the money they extorted," says Fayzullah, another member of my cooperative.

...After the Soviet invasion, which cost a million Afghan lives over the course of the 1980s, followed by five years of gut-wrenching civil war and another six of rule by the Taliban, who twisted religious injunctions into instruments of social control, Afghans looked to the United States -- a nation famous for its rule of law -- to help them build a responsive, accountable government.

Instead, we gave power back to corrupt gunslingers who had been repudiated years before. If they helped us chase al-Qaeda, we didn't look too hard at their governing style. Often we helped them monopolize the new opportunities for gain. A friend of mine, one of the beneficiaries, was astounded at the blank check. "What are we warlords doing still in power?" police precinct captain Mahmad Anwar asked me in 2002. "I vowed on the Holy Koran that I would fight the Taliban in order to bring an educated, competent government to Afghanistan. And now people like me are running the place?" I had to laugh at his candor.

...What I've witnessed in Kandahar since late 2002 has amounted to an invasion by proxy, with the Pakistani military once again using the Taliban to gain a foothold in Afghanistan. The only reason this invasion has made progress is the appalling behavior of Afghan officials. Why would anyone defend officials who pillage them? If the Taliban gouge out the eyes of people they accuse of colluding with the Afghan government, as they did recently in Kandahar, while the government treats those same citizens like rubbish, why should anyone take the risk that allegiance to Kabul entails?

More and more Kandaharis are not. More and more are severing contact with the Karzai regime and all it stands for, rejecting even development assistance. When Taliban thugs come to their mosques demanding money or food, they pay up. Many actively collaborate, as a means of protest."

Chayes sees nothing short of a total purging and reconstruction of the Afghan government and agencies as the sine qua non of accomplishing anything meaningful in Afghanistan but, as we've seen for seven years, that's not even on our agenda.

In the seven years we've been there, we have always approached Afghanistan in the context of two destroyed office towers in New York. To the extent we've made any serious demands on the Kabul government, they've always been about cooperation with our objectives. Oh sure, we've chided Karzai about corruption and "demanded" he reform his government and its institutions and then we turned on our heel to face the Taliban.

We have never been willing to accept that the warlords and thugs that infect the Afghan government are there only because Karzai's very survival is totally dependent on their support. Our effort there has been overwhelmingly military and our military effort has entailed an awful lot of whistling past the graveyard, deluding ourselves that defeating the Taliban is the key to something. It's because our military effort has been premised on delusion that we've contented ourselves with fighting a military war while ignoring every rule in the handbook of counterinsurgency war, rules proven again and again over the ages.

Until we come to redefine the war in Afghanistan in terms of eradicating warlordism itself, not just Taliban warlordism, we're only spinning our wheels. As Chayes points out, giving the Afghan people a choice between a warlord insurgency and a warlord government is to give them no choice at all.

The sad reality is that we've already written off the Afghan nation and its people. There is nobody - nobody in NATO, nobody in the Pentagon, nobody in the White House who would even entertain the idea of the sort of effort that would be required to expand the conflict we've been running (and losing) on a shoestring into a general war on warlordism in Afghanistan.