Gaza, from a Palestinian's Perspective 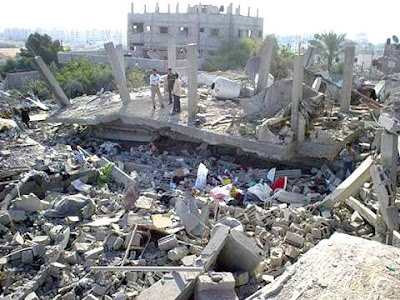 Israel says it is bombing Gaza in retaliation for recent rocket attacks it blames on Hamas. Israel maintains it is targetting only Hamas installations. Nobody disputes the right of self-defence but just how clean are Israeli hands?

"Israel says it is acting in "retaliation" for rockets fired with increasing intensity ever since a six-month truce expired on 19 December. But the bombs dropped on Gaza are only a variation in Israel's method of killing Palestinians. In recent months they died mostly silent deaths, the elderly and sick especially, deprived of food, cancer treatments and other medicines by an Israeli blockade that targeted 1.5 million people - mostly refugees and children - caged into the Gaza Strip. The orders of Ehud Barak, the Israeli defence minister, to hold back medicine were just as lethal and illegal as those to send in the warplanes.

Ehud Olmert, Israel's prime minister, pleaded that Israel wanted "quiet" - a continuation of the truce - while Hamas chose "terror", forcing him to act. But what is Israel's idea of a truce? It is very simple: Palestinians have the right to remain silent while Israel starves them, kills them and continues to violently colonise their land."

This is no apologia for the rocket-firing terrorists. It's just a matter of perspective. When the lens is pulled back and you get the larger picture, neither side has clean hands in this one.
Posted by The Mound of Sound at 9:36 AM