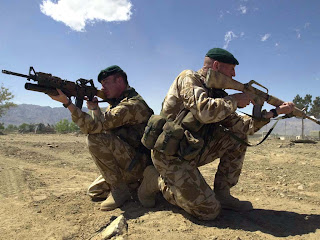 Western democracies are suited to just one kind of war - a conflict with a clear justification, an equally clear objective and a quick, successful resolution. It's the reason we make sure our armies have all the latest and greatest high-tech weaponry.

Western democracies are not at all suited to another kind of war - a campaign with a muddled or even false justification, no clear objective or exit strategy, that goes on indefinitely without anyone being able to say how it will end or when.

The first paragraph describes the initial Afghan war. The public believed that the Taliban and al-Qaeda were one and the same, anti-Western terrorists. The objective was to topple the Taliban government and destroy as many Taliban and al-Qaeda fighters as possible as they were driven from the country. It was supposedly over, save for the mopping up, in about a year. It rang all the right bells and the Bushies reveled in their triumphalism.

The second paragraph describes the current Afghan war. The Americans still haven't tracked down bin Laden; al-Qaeda has decentralized and opened branch offices throughout the Muslim world and beyond; far from crushing the Taliban, they're now back and resurgent; our own military leaders who promised us total victory over the Taliban now admit that we can't defeat them; no one dares to talk about much less define victory any longer and no one has anything resembling an exit strategy.

The American military's efforts are currently being led by four star General David Petraeus who's now become something of a household name in his homeland. Petraeus has spent most of his career engrossed in what's been alternately called low-intensity warfare, counterinsurgency or plain old, garden variety guerrilla war.

In the wake of 9/11, Petraeus headed up a team of the US military's best and brightest who digested the lessons of counterinsurgency going back as far as Caesar and put their accumulated wisdom into their services' new counterinsurgency field manual, FM 3-24, which I believe is still available, free, in PDF format on the web.

I took the time to read FM 3-24 and some of the reviews of it and I kept what I had learned in the back of my mind as I watched Petraeus take on first Iraq and now Afghanistan. What struck me was how regularly American tactics, strategies and policies run afoul of the lessons of that field manual.

It quickly became obvious that America and her allies are not fighting David Petraeus' war. No one knows that better than the general himself but it's obvious that he's playing with the cards he's been dealt. He's leading a force that's worn down, worn out and very close to broken. He doesn't have anything near the size of force he prescribes as essential in his own field manual and he knows he's not going to get it either. Worst of all, David Petraeus knows that, in neither Afghanistan nor Iraq, has the US military secured the sort of victories it needed within the very limited time it had available to do just that.

I won't get into Iraq beyond noting that it's pretty much three grenades, all with the pins pulled, waiting to go off.

Our focus is properly on Afghanistan where our very best-case scenario today bears no resemblance to the outcome we'd been promised back in 2001 to 2003. Our military leaders, our own included, made boastful promises of victories they had no idea how to deliver.

We tried to wage a counterinsurgency war on a shoestring while one of Petraeus' cardinal rules, borne out over the centuries, is "go big or go home." How did Rick Hillier ever get the idea that Canada could tame a province as large and rough as Kandahar with a force of just 2,500 that fielded a combat group barely a thousand strong?

Once you ignore the cardinal rule of deploying overwhelming force to suppress the insurgents and secure the civilian population, a number of other fatal mistakes are triggered. One is reliance on excessive force and the other is an inability to get out quickly enough.

By now everyone knows that our troops are so understrength that they're forced to rely on artillery barrages and air strikes. The insurgents exploit that vulnerability by attacking from populated areas where our retaliation kills large numbers of innocent civilians. Not only does it look bad at home and abroad but, in a nation where such deaths absolutely must be avenged, we breed our own next generation of enemies.

Our enemy, the insurgents, also have a powerful weapon we cannot foil - time itself. The old adage goes that we have all the watches but they have all the time. It's so true and it is inescapable.

Petraeus has clearly warned that counterinsurgents (our side) have a very limited shelf life among the indigenous population after which we morph in the locals' eyes from liberator to despised occupier. We've been there for seven years and our most consistent success seems to be in wiping out their wedding parties. We haven't protected them from the Taliban or the criminal gangs or the other warlords and their militias or their own government's, regularly predatory security services.

It's come to the point where even some top British generals and diplomats now agree that NATO forces have become part of the problem, not part of the solution. What Canadian generals honestly think we'll never know given the chokehold Harper has on them, gagging them via his political commissars in the PMO. (I am constantly awed at our complacency with that grossly undemocratic betrayal of this country and its citizens).

The Dutch are scheduled to pull out in 2010 with our forces following a year later. In today's Guardian, the question is posed how long the British public will support war without end in Afghanistan:

is long term public support for the British military in Afghanistan now at risk as the numbers of troops increase? (Brown is expected to announce on Monday that hundreds of soldiers have already been quietly transferred from Cyprus as reinforcements.)

Kim Howells, the former foreign office minister, thinks so: he predicted in the Commons last week that as conflict grinds on "the people of our country will express concerns that we have heard little about to date", particularly following Taliban resurgence in areas from which they were supposedly eradicated. They would increasingly ask why British lives should be risked to preserve an Afghan regime he described as riddled with corruption.

The Tories apparently scent a change of public mood, too, threatening last week to oppose any fresh deployment unless their conditions were met on everything from better kit to a bigger role for Nato allies. Gordon Brown responds by claiming British self interest: he talked repeatedly today of a "chain of terror" through Afghanistan and Pakistan leading on to British streets unless troops were in Helmand containing the Taliban.

But what if Britons decide the west is no longer successfully containing the threat?

I think it's a question that virtually answers itself. Unless Britain finds itself wedded to the same geopolitical, regional petro-interests that are bound to keep American forces there indefinitely, I can't see support for the Afghan war continuing for long after we leave. Write the whole miserable adventure off to War Fatigue.
Posted by The Mound of Sound at 9:45 AM