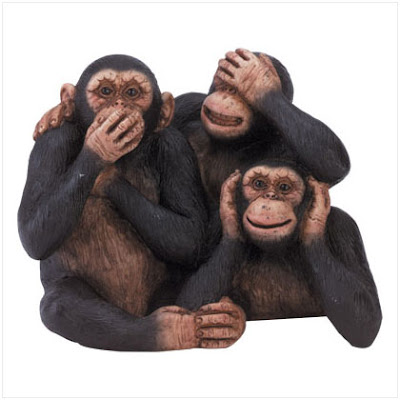 Like errant school children, the Harper Tories are working on talking points they hope will make Canadians believe the dog actually did eat their homework.

The theme seems to be we're not responsible for this recession, it was all somebody else's fault, we didn't make it worse for Canada and nobody could've seen it coming, not even us.

In other words there was no reason for Canada's Newly Awakened Government not to have acted these past three years as though Canada was recession-proof, despite the alarm bells that were ringing off the walls down south. There was no reason not to defund the federal government. No reason to have at least tried to introduce measures that would have reduced Canadian exposure to the looming American meltdown.

Nope, that's the past. Let bygones be bygones. Hey, isn't that the same message flogged to death by Grandpa McCain back in November?

Don't expect apologies for having projected surpluses just two short months ago or for inserting into the November economic update those provocative cuts to public financing for political parties or curbs to public servants' right to strike that sparked the opposition's threat to bring down the government.
And don't expect any acknowledgment that Conservative policies – such as relaxed rules around mortgage financing brought in by the government – exacerbated the economic situation.

Instead, the tone remains defiant.

As far as Harper is concerned, and Conservatives will continue to repeat, the economic crisis "originated outside Canada's borders" and was not, as opposition critics argue, worsened by tax cuts or excessive spending by the government.

Conservatives are instructed to declare that the government's actions put Canada in a better position to weather the storm and to point to the "stable leadership" Harper has shown.

The goal is to hammer the opposition proposal to offer a coalition government if the budget fails. Expect to hear lots of Conservatives mouthing phrases like this: "The political chaos of an unstable coalition would leave our economy, unity and public institutions at risk."

It's part of a two-track strategy: Woo the Liberals, bring them into the tent, just as the government has invited provinces and municipalities to share responsibility for the budget-making. At the same time, delegitimize any coalition the Liberals might lead as a political option for leading Canada out of the crisis.

So there, sadly, you have it. Taking a page totally out of the Bush/Cheney/Rove playbook, the tactic is to simply ignore the facts, invent fanciful nonsense to use instead, and then lie your ass off until those dumb enough to believe you, do. Hey, Harper knows there's a good hunk of that type of voter to be found in the 38% who gave him the nod last time. When you really have no other choice, why not roll that dice again?
Posted by The Mound of Sound at 9:11 AM

"Instead, the tone remains defiant."

Says it all right there doesn't it? There will be no changes at all & as always the Cons will try to "buy" the public with the budget & then commence to exterminate the Libs as well as the other party's.

I think it's fair to say that yes, this recession was coming no matter what the Canadian government might try, but it was the Conservatives who left us in such poor shape as they tried to buy a majority.