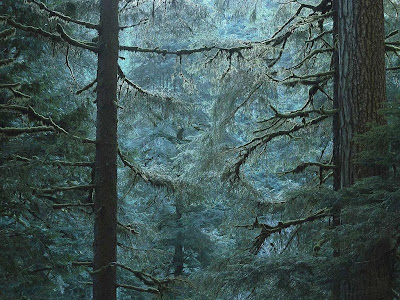 Along the West coast of North America from California to British Columbia, trees are dying faster, almost twice as fast as they did only three decades ago. It's a phenomenon that has wide-ranging implications for the region, its inhabitants and for the global environment. From The Guardian:

Trees in the western United States are dying twice as quickly as they did three decades ago and scientists think global warming is to blame.

In their surveys, ecologists found that a wide range of tree species were dying including pines, firs and hemlocks and at a variety of altitudes. The changes can have serious long-term effects including reducing biodiversity and turning western forests into a source of carbon dioxide as they die and decompose. That could lead to a runaway effect that speeds up climate change.

The forest survey, carried out by a team of scientists led by van Mantgem, is published tomorrow in the journal "Science." It showed that death rates of trees overall had more than doubled since 1955. In the Pacific north-west and British Columbia, deaths had doubled in 17 years. In California, the death rate took 25 years to double.

The data for the research was gathered by several generations of scientists counting trees over more than 50 years. It included forests in Oregon, Washington, California, Arizona, Colorado, New Mexico and south-western British Columbia. All were older than 200 years, with many being established more than 500 years ago. Death rates in old forests tend to be more stable since they mostly contain very old trees.

http://www.guardian.co.uk/environment/2009/jan/22/trees-death-global-warming
Posted by The Mound of Sound at 2:49 PM

I saw a report last week that stated the forests are now a source of CO2 with the gas release from decay outweighing the conversion of CO2 to O2, Worst it is a rapidly increasing trend as more and more trees die.

From geological records we know that a hot planet usually is swamp on the coast and desert in the interior. Few trees or anything else for that matter as it results in very low biodiversity.

The pine beetle on the west coast is rampant because temperatures do not drop below -40 long enough anymore to cause winter kills of the pine beetle larvae. Here in Toronto the gypsy moth cycle has sped up with majot infestations more often, previously they had not been a problem since accidental introduction over 100 years ago. As well we have exotic species of insect pests surviving such as asian longhorn beetle and emerald ash bore.

Not even gonna start on the disease.

The net CO2 problem is a function of the kill off from the pine beetle. Jay, you should drive through the interior of BC and see the vast swathes of dead trees, their needles a dead, rust colour.

I think the coastal rain forest will be the least impacted. The interior, however, is definitely in for a beating.

If Harper's looking for creative ways to spend money, he should look at a major reforestation programme to replace the weakest species of softwood with some more hardy varieties that will restore the carbon sink.

Well that and a century of poor forest management, which has created the perfect conditions for an explosion in pine beetle numbers. In fact I would be hesitant to blame climate change at all, given that a decade with a lack of large cold snaps in winter could be attributed to weather fluctuation. Certainly climate change is a possible (probable?) factor, but more warm winters are required before we can say with a large degree of confidence that is is responsible.

Given the wide climatic rages for most tree species it doesn't seem likely that the die of is directly related to climate change. The Guardian articles doesn't make it clear that the study blames (at least in part) climate change, so I wonder if it is a conclusion of the Guardian authors or the study authors.

After re-reading the article and paying more attention, it suggests that it is the summer drought that is causing the trees to die. The first question that rises into my mind is why forests aren't being replaced by more drought resistant species of trees.

The second thing that I noticed was that the article says that forests will become thinner if this trend continues. This is arguably a good thing in many forest ecosystems. Forest infilling as a result of poor forest management polices (mainly fire suppression) is a huge problem, and largely responsible for the outbreak of pine beetles (climate change may or may not play a role, see my above comment) as well as many other problems. This thinning of trees could result in forests that more resemble their natural state. Or not, the Guardian article doesn't give me much to go on.

One thing is certain I want to read the actual research paper.

There's always uncertainty when reading a newspaper summary of a research report. There's no doubt that the lodgepole pine problem needs careful planning on suitable species for reforestation. The lumber lobby naturally wants the most marketable species replanted but, as you point out, that might not be the best tree for other interests, environmental foremost among them.

i wish to say that you have nice post, the way you explain the whole thing, you simply made it easy to understand and the rest of the website is extremely good.

Health is one of the many aspect in our life that we should take good care because if we are sick , we became useless and unimportant. We loose hope and everything became stagnant. Visit my site for more information. Thanks.

Would you be concerned with exchanging hyperlinks? online casinos