Remember Those GST Cuts? Here's Your Bill and Have A Nice Day 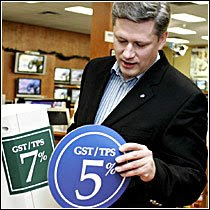 When Stephen Harper comes calling with his "rescue" budget on Tuesday, he'll be handing you the bill for those GST cuts he gave you. That 2% sales tax break is going to be charged back to your account. Because of the size of the deficit, it's like Harper's taking all that money back - with interest from the date you began enjoying the savings, interest that will continue to accrue on the deficit until you pay that off too.

Who knows, maybe you're one of the few who really benefited from the tax cuts. Maybe you shaved a couple of points off a new car or, better yet, a brand new house. Or maybe, like the rest of us, you just got an almost unnoticeable lightening of your grocery bills. Be that as it may, that money is all being recalled through the levying of the deficit on our tax bills.

I am hardly opposing stimulus spending. There's really not much choice. I'm just miffed that Boss Harp fiddled with federal finances for his personal political advantage in the good times, leaving the cupboard bare when the tough times inevitably arrived.

Just keep in mind that the 2% GST cut Harper said he was giving you was just a gag, a cheap political stunt. Now give us that money back and don't forget a penny of interest either.
Posted by The Mound of Sound at 8:43 AM

GST is a frustrating beast.

If I remember correctly from my back of envelope calculations -- if we were to increase GST to 10% (and put in appropriate exemptions for food, drink and housing) we could remove the income tax from almost 70% of Canadians.

However, you would never sell such a thing to Canadians at large because they see GST everyday, but they do not see their income tax everyday. So, even though most people (especially in the lower levels) will save more money that way. It's too easy to twist it as a tax increase.

It's quite sad really.