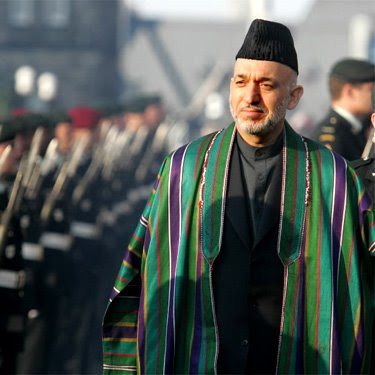 Can't we all just get along? Apparently not.
Perhaps with an eye to upcoming Afghan elections, the Karzai government is moving to clamp down on NATO operations in Afghanistan. From CBC News:
Karzai told lawmakers Tuesday that the government had sent NATO headquarters a draft agreement that would give Afghanistan more control over future NATO deployments.
It would also prohibit NATO troops from searching Afghan homes, according to a copy of the draft obtained by the Associated Press.
Late Tuesday, Karzai met Gen. David Petraeus, commander of American forces in Iraq and Afghanistan, to discuss civilian casualties and an increased role for Afghan forces in U.S. military missions, Karzai's office said.
The U.S. is expected to increase its focus on the deteriorating security situation in Afghanistan after President Barack Obama's inauguration. Some 33,000 U.S. troops are deployed in the country, but military commanders have said up to 30,000 more American forces will be sent to Afghanistan this year.
Taliban militants have taken control of territory throughout southern Afghanistan in the last three years. American military commanders say they have enough troops to win every battle but that there aren't enough U.S., NATO and Afghan troops to hold territory where militants operate.
It has become increasingly obvious lately that Karzai and the Western forces are on a different page in tackling the insurgency. Both sides keep demanding of each other what isn't to be had.
We want Karzai to cleanse his government of corruption. He can't, he doesn't control his government. It's fallen into the hands of warlords and thugs. We might as well ask Karzai to disarm the Taliban.
Karzai keeps demanding that we stop killing innocent Afghans. We can't, we don't have remotely enough troops to break our reliance on heavy firepower - air strikes and artillery barrages. We have to use these to defend our forces when they're attacked by insurgents.
You say potato, and I say... Well, you know. Both sides are unable to stop doing the very things that are destroying the public's confidence in the Kabul government, sapping their support for Westerners and driving them instead into the arms of the insurgency.
What's the answer? I don't know if there is one any longer. Too much time has passed that turning the situation around may no longer be possible.
Maybe we should take a hard look to see if what Karzai claims can possibly be true - that we're making the situation worse, not better. If we've become a net drain on Afghanistan's security and its future and if we can't or won't reverse that, the answer should be obvious.
Posted by The Mound of Sound at 11:38 AM