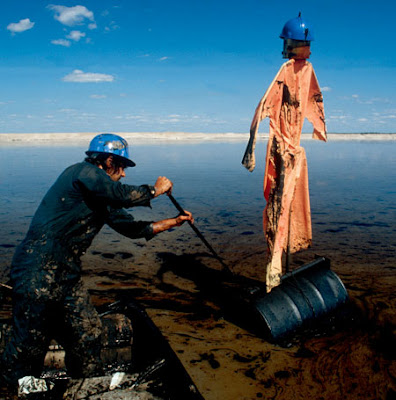 Proponents of the Athabasca Tar Sands like to dismiss the environmental problem as readily resolved by carbon sequestration, burying the carbon dioxide produced in mining and refining bitumen by pumping it into deep underground caverns.

Nobody seems to want to ask, much less answer the question why, if it was that simple, haven't the big oil companies been doing just that all these years? Maybe, just maybe, there's a reason.

The Toronto Star used the Freedom of Information Act to get its hands on an Environment Canada study on the viability of carbon sequestration in Athabasca:

By capturing about 200 megatonnes a year of carbon dioxide, sequestration (as carbon dioxide storage is known) is expected to reduce greenhouse gas emissions by almost 80 per cent in 2017, says an Environment Canada study obtained under the Access to Information Act.

But, the study notes, "there are emissions of CO2 and air contaminants resulting from the generation of the energy required by (carbon capture and storage) facilities. The CO2 emissions offset the volumes captured by the facilities, while the air contaminant emissions add to the load on the environment."
The June 2008 study predicts emissions of sulphur dioxide, the main ingredient in acid rain, will rise by up to 34 per cent by 2017. Nitrous oxides – responsible for ozone layer depletion – will rise by up to 24 per cent. Ozone depletion is linked to higher rates of skin cancer, among other health problems.

Tiny particulate matter is set to jump by more than 60 per cent in the oil sands and could lead to hazy skies and aggravate existing lung and heart problems.

"It is dirty oil for any number of reasons, and it's not just carbon dioxide," said Rick Smith, executive director of Environmental Defence, which has researched the links between oil sands production and health problems.

"It's very clear that we need to turn our attention to those other types of pollutants or else it's going to be a disaster in the future."

One party leader right of Jack Layton has chosen to frame opposition to the Tar Sands as disingenous and truly motivated by an anti-Alberta bias. In being so dismissive of Tar Sands opponents while understating the environmental disaster waiting to befall Athabasca, this party leader right of Jack Layton seems to be revealing his own motivation for supporting this reckless adventure.
Posted by The Mound of Sound at 11:06 AM

No more mythical than "clean" coal. ;)