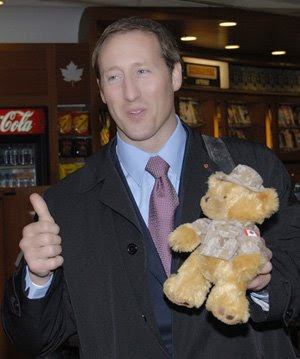 Apparently realizing just how incredibly stupid they look, the Harper government is pulling its thumb out and taking a close look at the Tory political liability also known as Omar Khadr.

Apparently awakened by the dawn of a new day in Washington, Harper DefMin Peter McKay says the government is "reassessing" its position on Khadr, the child soldier who continues to be held in Guantanimo.

From The Globe and Mail:

Ottawa appears to be hedging its bets, preparing for a possible request from Washington to take Mr. Khadr back. The issue the Conservative government has wished for so long to avoid may well end up surfacing during the first meeting between Mr. Obama and Prime Minister Stephen Harper.

Canada's Incredibly Sheepish New Government looks like it's waiting for Obama to tell it to jump and to clarify just how high that jump should be. Funny how the Ottawa John Wayne gang turned into cloned Urkels with the arrival of the Democratic president. Kind of makes you think they were Washington stooges all along, doesn't it?
Khadr's lawyer is optimistic that Obama will end the military tribunal proceedings against his client. "I cannot believe that the Obama administration really wants its legacy to be that the first thing it did was put on trial a child soldier," said Lieutenant-Commander Bill Kuebler.
(Photo caption - Peter McKay demonstrates new cost-cutting, no pants uniforms for Canadian Forces )
Posted by The Mound of Sound at 8:18 PM

Teneyke came out with a statement after McKay's stating the govt.'s (Harper's) stance had NOT changed. Contradictions are beginning to show.

It's not contradictions they're worried about showing up. It's that dark dude from Washington who's got them running through their diaper supply.