A Measure Of Futility In Afghanistan 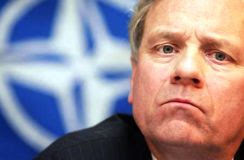 Now Kabul and NATO are squabbling.

The basic problem in Afghanistan is not too much Taliban; it's too little good governance. Afghans need a government that deserves their loyalty and trust; when they have it, the oxygen will be sucked away from the insurgency. ...we have paid enough, in blood and treasure, to demand that the Afghan government take more concrete and vigorous action to root out corruption and increase efficiency.

Gee, Mr. Secretary-General, ya think? Great timing, we've only been at it over there for what, seven years?

The Afghan government fired back through a foreign ministry spokesman named Baheen who complained that the Karzai government's efforts to promote the rule of law were undermined by "the international community, including some powerful NATO-member countries, have their own favourite warlords" who they back against Karzai.

Baheen also said that Afghanistan's opium production was only high in places where international foreign forces are stationed, like the British troops in Helmand.
Posted by The Mound of Sound at 7:13 AM