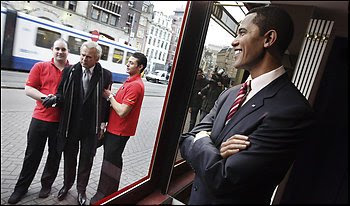 This photograph from the Washington Post says it all. It shows workers from Madame Tussaud's in Amsterdam hauling away the likeness of George w. while the wax sculpture of Obama appears to look on with a delightful, perhaps even approving smile.
The paper reports that Americans abroad are also feeling the love. Gone are the years of having to endure rebukes over Bush and Cheney and Iraq and so many other gaffes, they're now all being Obamafied:
As Micha Wyatt plans an inaugural bash at the Chicago Rib Shack in London, she is basking in the new warmth toward Americans overseas.
It's cool to be an American again, Wyatt said. "Finally! I'm tired of pretending I'm Canadian."
It's this sort of thing that goes a long way to dispelling the myth that critics of the Bush regime were anti-American. With rare exception that wasn't true. Even at the worst moments we knew that half of the American people believed the same things we did.
Posted by The Mound of Sound at 10:50 AM

The only problem I see in all of this is that many people have very high unrealistic expectations of Obama. He may be worlds better than Bush, but he is still just one man.

I thin far to many people have forgotten that

Do you happen to see PRE-INAGURAL ADDRESS yesterday?

I take some comfort in that Obama is fully aware of the limits of his own abilities, impressive as they are. He's surrounded himself with the "best & brightest" and he's made clear that he will remain open to good ideas from outside and from either side of Congress.

It's obvious in the way he pays attention to guys like Krugman and Stiglitz, able to discuss their latest comments at press conferences. What a difference!

Yet there is only so much the feds can do, especially in a nation debt bound at every level - federal, state, municipal, corporate and individual.

I found it interesting to read that the Fraser Institute and CD Howe are clinging to the old Chicago School mantras - tax cuts and spending cuts to fight recession. They don't grasp that it's been their hackneyed, one-track ideology that has landed the world in this mess. Tax cuts solve nothing, especially when they're focused at the top of the food chain.

No, Sassy, I missed it. I'll see if I can find it on YouTube.

MoS - it's in the link I provided, just scroll down when the cartoon page opens :)