Barking Noises from the Axis of Evil 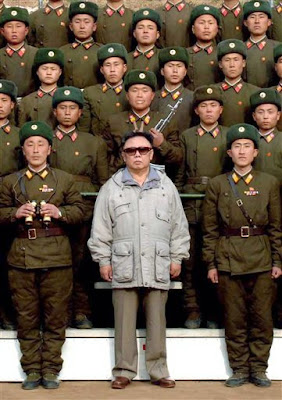 As a parting gift to the Bush administration, North Korea, charter member of the Axis of Evil, announced that it has weaponized enough plutonium to fashion four to five nuclear bombs. A NK foreign ministry spokesman made it clear the country has no intention of getting rid of the material so long as it perceives a nuclear threat from the U.S. - in other words, ever.

Tensions between a recently more aggressive South Korea and the ever bellicose North racheted up this weekend when the NK military declared an "all out confrontational posture" against the South, something that seems to be the equivalent of Def-Con Two.

The North alluded to the possibility of a naval engagement along the two countries' western marine boundary.
Posted by The Mound of Sound at 7:34 AM

Email ThisBlogThis!Share to TwitterShare to FacebookShare to Pinterest
Labels: Koreas