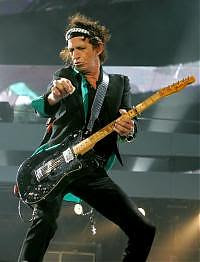 Does it really get much better than this?

They turned my life to Blues when I was 15 and I've been a Stones devotee ever since. You purists, I've heard it all before and thank you muchly for the same ole grind 40-years later but I'm sticking with these guys.

But there was one moment in the documentary when I think he really nailed it - when he recorded The Stones and Buddy Guy singing "Champagne & Reefer."

Now I must confess to having 38-Stones CDs (no "Goat's Head Soup" thank you anyway) and half a dozen Buddy Guy including the legendary "Lightning in a Bottle." But one of the greatest songs in Scorcese's documentary surely must remain "Champagne & Reefer"

Check it out for yourself

Watching Shine a Light on one channel and SNL on another with its brilliant Blue Note Obama riff. Don't like Goats Head. But I do love everything before it.

Just another thought. Isn't Aftermath a treasure trove? And Ya Yas? Love that shit. OK, it's not as good as the Perth 83 and Leeds 71 but it's the Stones officially. I thought Brian Jone was the coolest but Mick Taylor was spine tingling good Almost as good as Peter Green.

Jymn, Jones was the Stones' Morrison, just without all the talent. He was much more ego than performer. The key to making the band what it was - and they all knew it before them got him aboard - was Charlie Watts.

MoS, I disagree. Brian Jones was more than just white shoes on Ed Sullivan. He made Paint it Black. He birthed these men. He gave them style and attitude. Have you seen the youtube of the Stones doing "I'm Alright" at the NME awards before they were really famous? Brian Jones whipped them into a rock and roll frenzy. OK. He disappeared quickly. But, he was unique and lent a flavour to the Richard/Jagger magic that has not been equaled. And, I'm saying that as not an espcially big Jones fan. I'm more a 69 to 73 Richards/Taylor dude.

The best book on the Stones is "Up and Down with the Rolling Stones" BTW.

Jymn, you must be honest. How old are you, man - or are you a woman? You're seriously into this, I can tell. How far back do you go? That's sort of what frames the discussion, right or wrong.

Are you an encyopedic digest of minutiae or are you a true Stones' fan?

Another thought. Morrison. Have you ever listened to the lyrics of "Texas Radio and Big Beat"?
Norrison's voice was wonderful and rich. He may have been an alcoholic asshole but he lived and created some great music. Who wrote "Break on Through"?

Sorry for all these posts but I love rock and roll and hate when it is dismissed or derided.

What a great argument. If you elaborate on my point, you are an old fuck or a woman. Well, MoS, fuck your prejudice and ignorance. I think you should join the Cons.

Jymn, do not apologize for any of your posts. Who else, save you and me, is rushing in to add to this conversation?

You're looking at the wrong guy if you think I'm trying to dismiss or deride rock'n roll. That's pretty much where I live - that and my 42-year old marriage to motorcycles.

Think of me what you will, but, please. don't think of me who would ever dismiss or deride rock'n roll.

Wait just a second Jymn. When I asked who you were, awkward as I might have been it was no sexist or other "ist" putdown. For you to even suggest that demonstrates that you're totally unexposed (what a nice word) to my writings.

Here's an idea, chum. Before you condemn me to the fires of Hell based on your oddly constructed version of our exchange, why not read - this month, last month, all of 2008, 2007, to see if there's a shred of what you allege in me. When you're done that, get back to me.

I was really enjoying our discussion until you took it to the lower level.