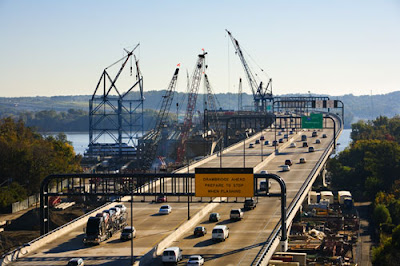 The Brookings Institute has published an op-ed piece, Memo to the President: Invest in Long-Term Prosperity, that offers some sage advice (to president Obama) on infrastructure investment, tips that would make good reading for Ottawa too:

Given your economic recovery platform, with action on education, energy and related topics, your administration has the opportunity to get the infrastructure investment right. This is critical because:

Major infrastructure projects of the past—such as the interstate highway system in the 1950s—were associated with steep increases in productivity. This productivity has receded in recent decades as investments have lost direction and failed to focus on key areas. Without a national strategy for infrastructure, we are not experiencing the economic benefits of transformational programs like the interstates, the social benefits of iconic programs like rural electrification, or the sustainability benefits of air and water pollution control programs of the 1970s and 1980s.

In the absence of a unified strategy, special interest and congressional politics spread funding around the country like peanut butter on a slice of bread, with no effort to advance national priorities or use cost-benefit analysis to optimize our investments.

To achieve such goals as job creation and a green economy—and the even broader aims of productive, inclusive and sustainable growth—we need to reform as we invest. Getting it done right is more important than getting it done fast.

Emphasize Infrastructure Reform: A crucial first step is to restrict substantial funding from the recovery package to investments that:

secure and rebuild the system

give some direct funding to metro areas, not just states and

Permanent and independent, this bank would provide financial assistance for innovative infrastructure projects of true national significance, acting where national uniformity is needed or the scale and geographic reach of a problem requires national attention. It would give priority to public-private partnerships that stimulate market-led advances in energy efficiency and transit-oriented development.

While America's situations and her needs naturally differ from Canada's there's enough commonality of interest and benefit to make this report relevant to Ottawa. Whether it's Harper or an Ignatieff-led coalition, getting the infrastructure programme done right is indeed more important than getting it implemented quickly. It's also critical for Canada to ensure that the money path is tightly focused with full emphasis placed on restricting funding to projects that have the highest prospect of return to the economy in the future.