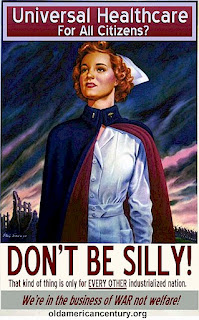 Let's hope money can buy happiness because it sure isn't buying Americans much in the way of health.

A report from the U.S. National Academy of Sciences finds that, although Americans pay more for health care and services than anyone else, they're less healthy and likely to die earlier than people of any other affluent nation.

Even the best-off Americans – those who have health insurance, a college education, a high income and healthy behaviour – are sicker than their peers in comparable countries, says the report by the US National Research Council and the Institute of Medicine.

"We were struck by the gravity of these findings," said Steven H Woolf, professor of family medicine at Virginia Commonwealth University in Richmond and chair of the panel that wrote the report. "Americans are dying and suffering at rates that we know are unnecessary because people in other high-income countries are living longer lives and enjoying better health. What really concerns our panel is why, for decades, we have been slipping behind." The report, US Health in International Perspective: Shorter Lives, Poorer Health, was commissioned by the National Institutes of Health. It compares the US with 16 affluent democracies, including Australia, Canada and Japan and many in Europe including Britain. There have been similar findings from the Commonwealth Fund over some years, but they have compared the US with only a handful of nations.

Unless action is taken, the report says, the health of Americans will probably continue to fall behind. "The tragedy is not that the United States is losing a contest with other countries but that Americans are dying and suffering from illness and injury at rates that are demonstrably unnecessary. Superior health outcomes in other nations show that Americans also can enjoy better health," says the report.

The US public is unaware of the issues, says the report. "I don't think most parents know, on average, infants, children, and adolescents in the US die younger and have greater rates of illness and injury than youth in other countries," said Woolf.

The NAS report adds perspective for Canadians beset by rightwing promises about a better future with private healthcare.   The promises are demonstrably false and the rhetoric is empty.
Posted by The Mound of Sound at 7:42 AM