Alberta Has Been Climate Changed - And It's Forever 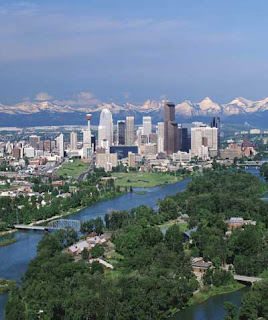 "This is Pacific Northwest U.S. weather we're getting and we're not built for it. We didn't design our cities, our floodways, our flood maps, anything for this. " - John Pomeroy

The deluge that caused such massive flooding throughout southern Alberta has brought other impacts that will remain long after today's flood waters recede.  How long?  Try indefinitely, permanently.

Alberta apparently has just had a climate change makeover and this could be the first of many to come.

John Pomeroy, who holds a Canada research chair in water resources and climate change at the University of Saskatchewan, says the natural disaster has permanently altered everything from how the landscape will handle future flooding to the Bow River's status as a world-class trout stream.

"The Rockies have changed from this," said Pomeroy, who spoke from the Alberta mountain community of Canmore, where he works at a field research station. "They're even going to look a little bit differently."

"Even if the climate stayed exactly the same and we just had regular precipitation events in the future, the way the watersheds translate rainfall and snowfall into streamflow is going to be different now.

"This is Pacific Northwest U.S. weather we're getting and we're not built for it. We didn't design our cities, our floodways, our flood maps, anything for this. "

Alberta should build flood walls along the Bow River and manage its reservoirs for flood control as well as power generation, Pomeroy suggested. He said it was just luck that some reservoirs upstream from Calgary were unusually low and were able to hold back some of the water.

The province also will have to rethink what it considers developable land, said Pomeroy. The location of some developments in the Bow Valley are actually built on flood plains, something he calls "absurd hubris."

"We've got to live with it and that means not developing in certain areas," he said. "We can't engineer our way out of this."

Will this finally convince the Reckless Rednecks who control the Alberta legislature (including much of the Opposition) and populate the province's seats in the House of Commons to come to their senses and abandon their infantile delusions of Canada as a fossil fuel superpower?

As Richard Fantin at Canadian Trends points out, Alberta is a provincial Ponzi scheme.   Of all the provinces, Alberta was rated the most likely to default on its debts within 30-years.  It was given an 84% chance of default.   Quebec, by contrast, was assessed as having the lowest prospects for default at 28.2%.

Canada can't afford to have a national government or even an Alberta government in the hands of reckless, irresponsible ideologues.  They're already bringing everything down.  But, that said, we need a vastly improved Liberal and New Democrat opposition able to address the rot that has set in and wise enough to know how to rebuild out of the Tory ashes.

This 2013 flood is not only going to affect progress in Alberta but also all the country monetarily.

Yes, probably Anyong. What concerns me, however, is what is coming - the floods and droughts - in the near future.

When you're a pastoral herder in the Sahel it really doesn't matter if your herd dies of thirst one season or drowns the next. Dead is dead.