Are We Heading for Despotism? 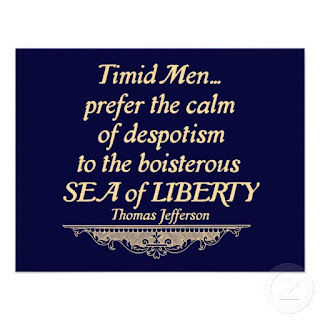 The first thing that someone stealing your privacy will tell you is "don't worry."  That's the standard line after they have been exposed stealing your privacy.   That, in turn, is reinforced with suggestions that you don't matter to them anyway, you're insignificant and that they have netted so much data they don't have the means to really snoop into what you're saying and thinking, not little old you.

What they don't tell you is that if they did, for some reason perhaps known only to them, they could very easily snoop into just about everything you've been thinking and doing provided you've been communicating to someone about it.

Their bottom line is "trust me."  In other words, trust me with your privacy and I'll use that power only against the bad guys.  I promise. Trust me with the most important right you have, the one upon which hinges most of the other rights you might recognize and many that you don't.

In April of last year, The Guardian's Henry Porter contemplated whether democracy itself can withstand state snooping.

The millions who suffer under dictatorships will be astonished that we are about to let slip – with so little protest – the freedoms for which they continue to sacrifice so much.

Privacy from state snooping is the defining quality of any true democracy.

The law of function creep means that oppressive measures passed to address terrorism and crime are invariably deployed in much less threatening contexts. For example, the spread of surveillance under the last government's Regulation of Investigatory Powers Act resulted in local councils using counter-terror methods to mount undercover operations against fly-tippers and those suspected of lying in school applications.

Once the intelligence services and police have these powers to insist that internet and phone companies hand over our data without our knowledge, in a crisis it will be a short step for the same people to argue that they need to start reading our communications.

How long before messages between trade unionists or those legitimately engaged in protest are subject to routine interception by the authorities, because their activities trouble the state?

...Why not just let the state have all our information? Is it worth fighting in an age when Google and the phone companies know so much about us already? The answer comes from the German philosopher Wolfgang Sofsky, who wrote: "Privacy is the citadel of personal freedom. It provides defence against expropriation, importunity and imposition – against power and coercion."

The more practical objection is that police and security services are capable of getting things wrong, as well as abusing a system that allows such power over ordinary citizens. There have been prosecutions of police officers for misuse of the police national computer and the ANPR surveillance system. Given the countless cases of police misconduct and present worries about the standards of Britain's police, it is probably wise not to hand them such an intrusive tool.

This surveillance system is the instrument of a Kafkaesque state that grants itself the right to universal suspicion, while enjoying the protection of a new law, brought in by a lawyer, that allows evidence of official misconduct to be heard in secret.

Canada's federal government understands the power of privacy at a pathological level from which arises a blanket of near-complete and utterly despotic secrecy.  Here then a few passages from a speech by Supreme Court of Canada Chief Justice, Beverley McLachlin:

The need for information is compounded by the inevitable tendency of governments, and those exercising powers on behalf of the government, to disclose only as much as they deem necessary.

Despotic secrecy is the historic norm. Democracy sets its face against this. Yet, unchecked, the tendency is always there. And unchecked, it will inevitably undermine democracy.

This proposition has been recognized by statesmen and scholars.
Pierre Elliott Trudeau said this:

...the democratic process requires the ready availability of true and complete information. In this way people can objectively evaluate the government’s policies. To act otherwise is to give way to despotic secrecy.3

In milder form, James Madison, one of the American founding fathers said:

A popular government without popular information or the means of acquiring it is but a prologue to a farce or a tragedy, or perhaps both. Knowledge will forever govern ignorance; and the people who mean to be their own Governors, must arm themselves with the power which knowledge gives.4

And Professor J. R. Mallory, in his seminal work on the Canadian system of government, stated simply this:

...[the] major problem in modern constitutional democracy is to obtain effective control, by public opinion and by legal restraints, of the apparatus of the state which continually expands.5

In sum, in any system, democracy included, the apparatus of the state must be controlled. Without controls, the natural tendency to increase power will not be restrained. And without information, the necessary controls, whether at the ballot box or through judicial challenge, are absent. Constraining the “apparatus of the state”, to borrow Mallory’s term, depends on the people being informed about what government is doing.

In other words the same people who tell you to "trust me" with your privacy are those least willing to trust you with theirs.  This is powerful evidence of rising despotism and a process of deliberate, steady and covert dismantling of our democracy.   That this seems to be standard practice in 21st century petro-states ought to, if nothing else, put us on our guard.
Posted by The Mound of Sound at 9:19 AM