Will Quebec Fire a Rocket Up Harper's Fundamentalist Ass? 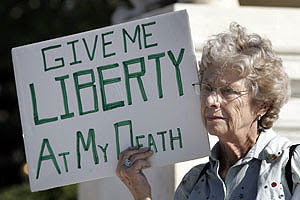 All eyes should be on Quebec's National Assembly where the government is expected to table its bill on medically-assisted death.

The debate, said to be fierce, shows how emotionally-charged and religiously-loaded the subject is.  To some it's murder by physician.  To the other side it's death with dignity or terminal sedation.  It's a subject that almost convulses with emotion, especially fear.   There are many quite willing to deny others who stand on the cusp of death, as we must all do, the opportunity to escape the "Great Agony."   And those who work so hard to deny the dying this humane, compassionate alternative always claim the moral high ground, usually on the strength of some book of ancient fables.

Those who oppose this should at least look into Oregon's Death with Dignity Act, and the nearly two-decades of experience since it was enacted.  The record speaks for itself and utterly disposes of all the critics' grounds of opposition except for the religious, the superstitious ones.   This is one of those situations where freedom from religion must prevail.
Posted by The Mound of Sound at 7:28 AM

Nischay Yes it's entitled "Beyond points - How to turn SMW into a complete Geographic Information System".