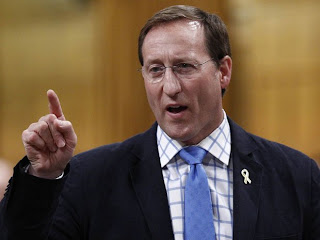 This time it's Elmer MacKay's dull boy, DefMin Peter, himself no stranger to clumsy scandal.

It seems enough Harper slime has rubbed off on the defence minister that he's been using the military's National Investigation Service to "investigate journalists who wrote or broadcast embarrassing information about MacKay and the Canadian Forces leadership."

Question:  what can you possibly write about Peter MacKay and the Canadian Forces leadership that they wouldn't find in some way embarrassing?   This bunch has gone out of their way to make themselves embarrassing.

The latest incident concerns the Ottawa Citizen's defence correspondent, Dave Pugliese, and a recent naval exercise, RimPac 2012.   Pugliese reported details of the Canadian navy's participation in the exercise, information he had garnered from a U.S. Navy press release.  The article gave the source, repeatedly.

Dimbo MacKay smelled a rat.  He was sure someone inside NDHQ was leaking secret information to Pugliese and so he demanded the NIS get to the bottom of it.

Citizen editor-in-chief Gerry Nott said the conduct of the NIS “would be humorous if it wasn’t outrageous. For investigators to be tied up chasing a phantom leak of publicly available information speaks to both paranoia and incompetence.”

In an email, Jay Paxton, MacKay’s director of communications, said the minister’s office “disapproves of the unauthorized release of information that can be damaging to the defence team’s ability to communicate with Canadians and views any release of unauthorized information as a breach of ethical conduct.”
“Such a breach of conduct includes information that is damaging to the activities of the defence team or individuals of that team.”

Paranoia and incompetence, yes, it's not hard to see Peter MacKay with an abundance of those.   Yet I found that "defence team" business a bit disconcerting.  It suggests a seamless blending of the political and the military as though the military is now part and parcel of the Conservative "team".

We saw evidence of this sort of thing back when MacKay was caught using an Air Force helo to ferry him from a fishing camp.  When that blew up in his face he set Air Force officers into a search, scouring records to find evidence of similar abuses by opposition MPs.

To use the military's criminal investigative service as a tool against those who embarrass MacKay and senior military commanders is a deeply disturbing and flagrant breach of the critical line that separates the military and the civilian world in any legitimate democracy.  This is not benign and it is certainly not trivial.  And it's certainly not just the work of a dim-witted minister in over his head.

Former Chief of Staff, General Walter Natynczyk, set the NIS hounds on the media when a CTV reporter got the skinny on Walt using government jets to fly to hockey games and a Caribbean vacation.

Ottawa lawyer Michel Drapeau said the NIS investigations involving the news media that were obtained by the Citizen provide disturbing examples of how the military police force can be misused. “When you call in the cops because a journalist has written something embarrassing to Peter MacKay or the military leadership, then I would see that as intimidation,” said Drapeau, who has written legal textbooks on military law as well as the Access to Information act. “It has nothing to do with national security; it’s all about sending a warning to those inside the military that they are to keep quiet.”

He said the NIS should be disbanded and Canada should adopt the British system where the military’s police investigation unit is made up of civilians who do not report to the chain of command.

“The NIS has become a personal police force for the ranking military officers and there are no checks and balances,” Drapeau said.
The Harper gang seem to have a real fondness for their secret police.  We saw that when Harper set up his own bitumen pipeline secret police force comprising officers of the Edmonton and Calgary city police, the RCMP and CSIS.   More recently there was the move, by RCMP Commissioner Paulsen, to gag his senior officers and cut off communications between them and opposition MPs.

It's time to do an audit of the Canadian Armed Forces and their National Investigation Service.   If they don't understand the line - and they don't - we have a real mess on our hands.
Posted by The Mound of Sound at 7:35 AM

So Pete had the boys dig deep for information and all he got was small potatoes. How embarassing.

Oh!Oh! Am I in trouble? Will a little tin hat grneral be knocking at my door?

If only it was so benign, RF. It's not. There is no room in a democracy for partisan political secret police agencies.

We have already seen evidence of the emergence of a Royal Conservative Mounted Police and the secret pipeline police/intelligence agency. In any government there is a tendency to blur lines but these are lines that are broken, not simply bent.

Unless the RCMP and the armed forces remain apolitical they become a threat to democracy and one that has to be taken very seriously and, by whatever means necessary, corrected. They have to recognize they serve the country, not a political party, not a prime minister, not any cabinet minister. They have to submit to political direction but, above all, they serve the country and that distinction is critical.

Sorry to be flippant MOS. I agree that the Mounties are well on the way to becoming the political police for the neocons. One federal election, one provincial election.

The problem is that everytime I thinke of Belinda and the sad spectacle of potato pete begging foe sympathy I laugh.

Didn't Pete and Steve sic investigators on the veterans that were complaining about their treatment regarding benefits? Didn't they accuse them of being opposition shit disturbers, only to have it become clear that they were lifetime Conservatives, tho hopefully they will reconsider being HarperCons!

What is it with these Reich Wingnuts that love to dress up like soldiers, make war and act tough, but then treat returning, often injured, vets like crap?

It's fear. fear breeds blind partisanship and a love of power. Feeling small inside and being afraid the world is out to get you leads to this bizarre chest thumping tribalism. Decking oneself out in the trappings of military gives on a feeling of power over the things out to get you.

If those things happen to be aged, injured returning vets, and this particular 'out to get you' happens to be asking for benefits and in the process making your tribe (which you depend upon to feel bigger and stronger than the rest of the world) look bad... well...