One of the blessings of living in a small, coastal town is being able to observe change.  It doesn't come often.   We don't have a forest of construction cranes obscuring our horizon.   There are some two-storey buildings, a few, but that's it.  Anything higher than that is an apartment or condo.

So when the town pub, the 124-year old former railway hotel, the Rod & Gun, gets a makeover, it's news.  It's so small town that while the pub is closed for renos, the owners have bought their regulars temporary memberships at the Legion right behind it. 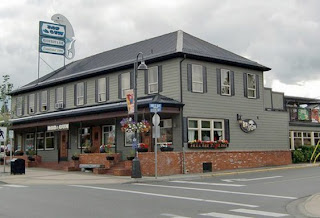 Change, change, change.   Humpback whales have returned after an absence of 40-years.  Back then we hunted them to extinction.  Now they seem to have figured out it's safe to come back.  Not so safe for boaters, however, as a couple have recently discovered.  These whales are big - up to 52-feet in length and 79,000 pounds and, for all their size, they like to launch themselves out of the water, often getting most of their mass airborne. 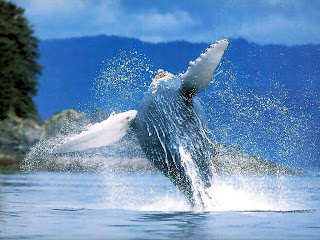 What the locals have discovered is that humpbacks don't pay attention to small boats so if they breach and you're in the way, you have a problem.   And, since they can remain underwater for 15-minutes, a sport fisherman can enter their area with no idea the whale is below until it isn't.

We're also more attuned to the reality of climate change.  One form is in species migration.  Salmon and other cold-water fish stocks are already moving out of warmer waters to the south and into our still cold Pacific waters.   Pelicans have reached Victoria harbour.  Anchovies are moving in to territory where herring once dominated.  The Humboldt squid has migrated from the Sea of Cortez to show up in mass strandings on the beaches of Tofino.  The giant sunfish, once a rarity, is being seen much more frequently basking on the surface.

In this morning's Victoria Times Colonist, the lead editorial addresses our warming climate.


At Fruit Trees and More Nursery in North Saanich, Bob Duncan gets hundreds of lemons from his tree. Over on the Lower Mainland, Art Knapp nurseries have seen a 20 per cent increase in sales of species like olives and figs.
Global warming is often debated in the big picture, but the details of gradual changes around us bring the debate down to earth. The devastating march of the pine beetle is one effect of warmer temperatures that is clearly visible across vast areas of B.C.’s forests. New crops close to home are another sign of the change.

In the Cowichan Valley, Teafarm planted 200 tea plants of the same type found in India and Sri Lanka; all but one survived. Owners Victor Vesely and Margit Nellemann plan to add more camellia sinensis this year, and hope to harvest their own tea in the next few years.
Across the water on Saturna Island, Michael Pierce’s Saturna Olive Consortium is a nursery that doesn’t sell olives but grows 12 varieties of olive trees for those who want to plant a bit of the Mediterranean in their corner of B.C. On the consortium’s website, he advises: “Growing olives in British Columbia should be seen as a grand and wacky experiment. It is not for the risk averse.”
Like Bob Duncan, however, some Islanders are taking risks, not only with lemons, but also oranges. Pineapple guavas are a smaller version of a tropical fruit that shows promise for our climate. And six kinds of figs will now grow here, where once only two types could survive, says Wim Vander Zalm of Art Knapp Nurseries.

Tea, oranges, lemons, guava, olives and all manner of figs?  Whales and monster squid and giant sunfish?   On our island we're a Petri dish for change but, then again, we have the most benign climate to absorb the impacts and adapt to change.   Most of the remainder of the world is not so lucky.
Posted by The Mound of Sound at 10:39 AM

Wow, hearing about the "Rotten Guts" certainly brings back a memory or two. I'm a Kootenoid, but have enjoyed the R and G on more than one occasion when visiting that part of the Island.

Why you south island ponce, you snotty Philistine. "Rotten Guts" indeed. Besides, it's about the best we've got even if that's not saying much.

We were in Campbell River and on Quadra Island last weekend. They were really my idea of paradise.

Campbell River, really? I can see Quadra but I prefer being a bit further south where the Rain Festival is a bit more bearable. Then again I suppose Campbell River is 'south' for you, isn't it? And, besides, we have the really great beaches.

I have never spent enough time anywhere on Vancouver Island to discover any drawbacks. I am usually lucky to have nice weather. The one exception was the week I worked in Port Alice when I did not once see the sun. But even then, I thought it was beautiful. I grew up absolutely land-locked and love the ocean, and I kind of like rain, too.

Port Alice, like Port Hardy, is known for extended stretches of stormy, cloudy, rainy weather. On the 3 sunny days they get each year it's spectacular, but...

I think you would be hard pressed to find a spot on the island other than Victoria that doesn't get an ample amount of rain but few complain.

Two weekends ago I managed to take my daughter and her fiance, a Chicago fellow, to Tofino and it was just perfect - sunny and really big waves. He had never seen anything like it and was noticeably awed. He has relocated to Vancouver and is already into the landed immigrant process.

I like being with someone who is seeing either the ocean or the mountains for the first time. I remember that awe.

My partner is from Saint John NB, and he had never seen the mountains. I loved taking him to Jasper.

Mound, the Kootenays are certainly not on the South Island, just as I am not a ponce. Also I didn't mean the Rotten Guts monicker in any derogatory way, rather many of the locals (mostly musicians like Terry Macdonald, Ron Stanley and other folks involved with what was the Coombs Country Opry) that I partied or jammed with when in the area, used that term in an affectionate manner - like a nickname....jeez. Mind you I was occasionally there back in the late seventies and the eighties, which may or may not before your time there. Likewise a funky bar in Nelson much patronized and enjoyed by folks, greatly because of its music, was referred to as the Zoo due to the variety of human fauna found inside!

Koot, I was just taking the piss. I somehow thought you had migrated to the Victoria area. Over time I can get impressions of people, what they do, where they live that are really just guesses.

I do notice however that, while you deny being a ponce, you do not dispute being a Philistine. Ha. And I'm not remotely attached to the R&G. I seem to go in there, on average, about once a year.

I forgot to deny being a Philistine, but it is always difficult to prove a negative. What the hell is a Philistine anyway - a Semite named Phil?