When He's Not Kissing Ass, He's Kicking Ass - It's the Only Game Harper Knows 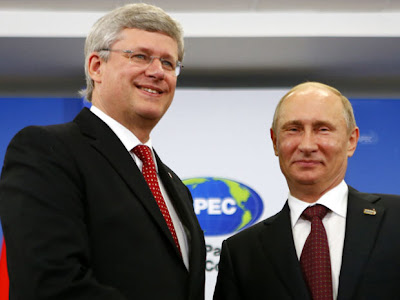 He used to lambaste the Chinese - before he became Beijing's bitumen bumboy - but Sideshow Steve Harper has shown he still has game when it comes to Russia and Vlad Putin.

On the eve of the G8 summit, Steve has denounced Putin for backing "the thugs of the Assad regime" in Syria.   And then, as though that wasn't enough diplomacy, Steve added another Putin smackdown, “I don’t think we should fool ourselves. This is G7 plus one. OK, let’s be blunt.”

Steve has a convenient recollection of history.   The only reason Canada got into the G7, or shall we call it the 'G6 plus One' was at Washington's insistence when the Americans feared being isolated on our side of the Atlantic.

It's odd that Steve is berating Putin at all given they both have similar ethical instincts.   In any case his caustic remarks couldn't have come at a worse time now that international comity has been sent reeling by the Snowdon/NSA Prism revelations that revealed how Britain and the United States used the 2009 summits in London to rapaciously spy on the Turks and South Africans and on the Russians respectively.
Posted by The Mound of Sound at 9:58 AM

If ever there was a Canadian prime minister who knew nothing about international relations, Mound, it's Stephen Harper.

Oh come on. He doesn't know anything about national affaires either.


Although it was Harper's mouth that opened, I believe the words that spilled forth were Netanyahu's.

After 2 recent attempts to bring Vlad around to Net's way of seeing things, it appears he got Put in his place rather abruptly.

Once Net grasps he's not going to charm or bully his way through, he and his people are not known for their tact.

Why doesn't someone take the PM aside and tell him what an arse he is.