NASA apparently hit a nerve when it released a remarkable satellite photo of the state of Alaska taken June 17.   What made the picture stand out is that there are almost no clouds in a state that has the cloudiest areas in the U.S.  From SFGate.com: 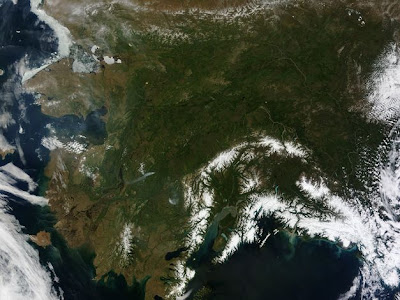 At first glance, it’s just a great photo of nearly the entire state of Alaska on an exceptionally clear day. What could be the problem?

Well, turns out that photo shows an anomaly that some are fretting signifies yet another big shift in global climate – a shift toward the hot.

Now a study released Monday from the United Kingdom provides more fodder for freaking out over that picture of Alaska.

In a press release from the University of Sheffield, whose scientist led the research, jet stream changes were blamed for the big ice melt in Greenland … and may signal another big year of heat and melting. (Note: “GrIS” = Greenland ice sheet)

Here’s the main part of the news:

“Our research found that a ‘heat dome’ of warm southerly winds over the ice sheet led to widespread surface melting. These jet stream changes over Greenland do not seem to be well captured in the latest Intergovernmental Panel on Climate Change (IPCC) computer model predictions of climate change, and this may indicate a deficiency in these models. According to our current understanding, the unusual atmospheric circulation and consequent warm conditions of summer 2012 do not appear to be climatically representative of future ‘average’ summers predicted later this century.

“Taken together, our present results strongly suggest that the main forcing of the extreme GrIS surface melt in July 2012 was atmospheric, linked with changes in the summer North Atlantic Oscillation (NAO), Greenland Blocking Index (GBI, a high pressure system centred over Greenland) and polar jet stream which favoured southerly warm air advection along the western coast.

“The next five-10 years will reveal whether or not 2012 was a rare event resulting from the natural variability of the NAO or part of an emerging pattern of new extreme high melt years. Because such atmospheric, and resulting GrIS surface climate, changes are not well projected by the current generation of global climate models, it is currently very hard to predict future changes in Greenland climate. Yet it is crucial to understand such changes much better if we are to have any hope of reliably predicting future changes in GrIS mass balance, which is likely to be a dominant contributor to global sea-level change over the next 100-1000 years.” 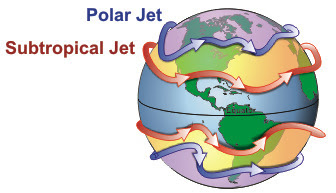