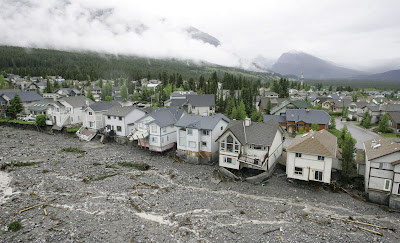 My views of Alberta's Conservative government were formed decades ago when the issue of mandatory infant car seats came up in the legislature.  Car seats - for kids - huge controversy, really.

Conservative members were quite outspoken.   Alberta motorists didn't need any more laws tying them down.   Sure infant car seats were a good idea but that should be left up to the parents, not forced on them by the government.   The good people of Alberta had the right not to be told what to do by their government.

It was astonishing.  They were speaking up for the parents, voters, instead of their children - those who needed protection, especially from parents who felt car seats were an intrusion on their individual liberty.   Eventually Alberta did make infant car seats mandatory but I think the legislature had to be shamed into it.

Which brings me from car seats to floods.   Back in 2006, the Alberta legislature had a flood mitigation committee that, among other things, looked into the risks of unrestricted development on flood plains.   The committee issued a report that recommended, not surprisingly, that construction not be allowed in places that were just going to flood anyway.

Now, here's the thing.   That report came out in 2006 but the Alberta government sat on it until just last year.  And that's got the former MLA who chaired that committee a bit angry.

"The one thing they could have done …they should have stopped building some housing and buildings on the flood plains. And that was a strong part of that report," George Groeneveld, who chaired the flood mitigation committee and report, told CBC News.
"If you’re going to build in those areas, you take on the responsibility yourself. That to me was the strength of the report, stop building where we shouldn't be building."

The 2006 Provincial Flood Mitigation Report, which was just released last year, recommended a cessation of the sale of Crown lands in known flood risk areas.

"Selling lands in flood risk areas is the opposite of flood mitigation," the report stated. "The province loses its say in the use of these lands and any protective measures would need to be taken through cumbersome mechanisms such as legislation or regulations.

"Undeveloped flood plains are the natural and most effective form of flood mitigation, and this recommendation will protect those areas."

Sale of flood-prone Crown lands creates the potential "for increased financial liability for the province in terms of Disaster Recovery Program funding that must outweigh the short-tem financial benefits of the sale," the report stated.

Whether it's infant car seats or houses built to flood it seems that, for Alberta, some things never change.   Is it any wonder they can't manage their Tar Sands?

By the way, here's a photo of Squadron Leader Harper, complete with pilot's wings, touring the devastation. 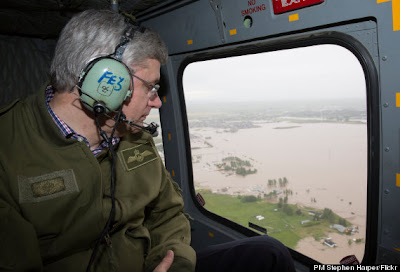