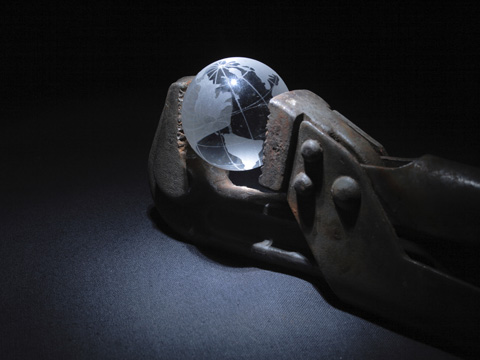 The Harper cabinet has been meeting to explore options for geo-engineering our way out of climate change.

Geoengineering, which has been advocated by Straight columnist Gwynne Dyer in the past, was defined as "the intentional, large-scale intervention in Earth’s environmental systems". The list of invitees included the deputy minister of defence, the director of the Canadian Security Intelligence Service, and the national security adviser to the prime minister.

Slides for the meeting acknowledge that the Earth’s climate is warming as a result of human activity, and warn that even a rapid implementation of emissions-reduction measures may not prevent a temperature rise of more than 2°C above pre-industrial levels by mid century. A graph projects a global mean temperature increase of 6° C by 2100, a change that scientists warn would likely be catastrophic.

Two classifications of geoengineering are presented as options to reduce future warming: carbon-dioxide removal (CDR) and solar-radiation management (SRM). CDR methods include afforestation, ocean fertilization, and the direct extraction of carbon dioxide from the atmosphere, the slides explain. One example of an SRM approach is to install "space-based orbiting mirrors" that would "reduce solar input". Another is to continually inject sulphur aerosols into the atmosphere "to mimic the effect of volcanoes".

On the phone from Edmonton, Mike Hudema, a climate and energy campaigner for Greenpeace Canada, told the Straight that it’s encouraging to see the Harper government acknowledge climate change as human-driven, but argued that the Conservatives have reached the wrong conclusion.

"If you admit that the climate crisis is happening and you agree with the scientific consensus that humans and greenhouse-gas emissions are the cause of it, then it is the government’s responsibility to reduce those emissions," he said.

In other words, we have a government that privately accepts the reality of man-made, emissions-driven, global warming but, instead of focusing on greenhouse gas emissions, prefers to pursue the darkest, most dangerous forms of disaster capitalism.

(Contrary to this report, Gwynne Dyer has stated that he believes geo-engineering is almost inevitable but not desirable.  He also believes that it will likely cause a major world war.)
Posted by The Mound of Sound at 9:23 AM

Some days I don't know whether to laugh or cry.

So much of what we do is trying to outsmart mother nature, but she always wins in the end. I wonder if we even CAN learn?

This is profoundly disturbing news, Mound, but somehow not the least bit surprising; leave it to Harper to look for an 'easy' way out of the problems that unbridled capitalism has unleashed. No doubt there are many salivating over the prospects of providing lucrative 'solutions' to those problems; be prepared, however, for the disaster that the tunnel vision of greed often results in.

I wrote about this a couple of days ago. I found it interesting that the most sensible solution was largely ignored. Afforestation. Creating good jobs, longterm view, improving health outcomes without risking other species and systems to geoengineering fallout.

But trust the Harperites to explore the most idiotic (and dangerous) approach to climate change mitigation.

It's a sign of their desperation. What they're after is something, anything, they can use to try to take themselves off the hook for our rapidly increasing greenhouse gas emissions from Tar Sands expansion.

Anything to avoid having to slash Canadian carbon emissions.

The average global temperature trend since 2001 is flat. http://endofgw.blogspot.com/

Rationalize that the temperature increase to 2001 was caused by a CO2 increase of 89.5 ppmv but that 25.46 ppmv additional CO2 increase had no effect on the average global temperature trend after 2001.

A simple equation at http://climatechange90.blogspot.com/2013/05/natural-climate-change-has-been.html calculates average global temperatures since they have been accurately measured world wide (about 1895) with an accuracy of 90%, irrespective of whether the influence of CO2 is included or not. The equation uses a single external forcing, a proxy that is the time-integral of sunspot numbers. A graph is included which shows the calculated temperature anomaly trajectory overlaid on measurements.

Well, Don, you should be making your pitch to Harper & Co. because either they didn't get your message, which I doubt, or they did and they simply know better. There is no one who would like to believe your claim than that bunch because it would instantly sweep away all the criticisms of their pet project, the Tar Sands, and they wouldn't hesitate to use it. Nor would Big Oil, Big Coal and Big Gas. They've got trillions of dollars in assets at stake that your contention could rescue.

It's curious I'm not hearing this from them but from some guy named Don Pangbum. Hmmm, I wonder what that could mean?


The one engineering project that seemed intriguing was robotic boats that would pump sea water and spray it into the sky above them creating "low level clouds" increasing the albedo. This might be ideal for the northern seas, to keep the ice pack ice longer into the summer. There would be advantages over space mirrors (cost) or particle release like sulphur (instant off, the clouds dissipate in days not decades.)

This would give quick response and be very tweekable as the ships may move to better locations. Further using it like snow machines you can ice cap many of the barren rocks of the north increasing albedo and moving some of the water out of the ocean. Shore line ice pack can be thickened. Seems like a lot of work but compared to space mirrors it would be a bargain,, even collecting some of the run off from the glaciers and creating clouds to protect them would delay melt. A fresh coat of snowy material would also cover the soot which is darkening ice and increasing melt.

Ideally we need to lower co2, cull the pop and fix the warming, which IMO is not going to happen. If we are going to play god with the climate at least this one seems more benign than most

Of course we also need to do some commons sense things like reforesting, using white roofs to reflect back heat,

Of course acidification will kill the ocean and us unless we can quickly sequester a couple trillion tons of carbon.

The ideas are intriguing, GAB, but there doesn't seem to be any universal option that will work for all parts of the world. To the contrary, geo-engineering (save perhaps atmospheric carbon scouring) seems to be full of pitfalls.

What's telling about our government's efforts on this subject is the departments involved - Environment Canada, CSIS and DND. That speaks volumes.