It's Only a Rumour, But It's a Dandy 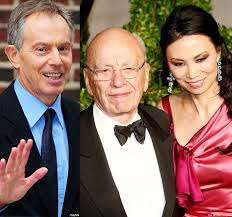 Did Tony Blair break up the marriage between 82-year old Rupert Murdoch and his 44-year old wife, Wendi Deng?

BBC financial correspondent Robert Peston, who is close friends with many of Mr Murdoch's key lieutenants, including News Corp CEO Robert Thomson, kicked the rumour frenzy off when he tweeted yesterday: "Am also told that undisclosed reasons for Murdoch divorcing Deng are jaw-dropping - & hate myself for wanting to know what they are."


Murdoch's biographer, Michael Wolff, added on his Twitter account: "I'm hearing the WHY, the big reveal, the scandal details, could come tomorrow."


He added ominously: "Rumor about the big B is everywhere except in print."


He confirmed "B" was Mr Blair after Mr Blair's spokesman issued a denial to The Hollywood Reporter.


"Tony Blair has denied an affair with Wendi Murdoch, so open discussion officially begins," he tweeted.


It is no secret that Blair is close to Murdoch and Deng.


Ever since she intimated to the New York Times last year that she and Mr Murdoch were living independent lives, speculation has mounted that their marriage was on the rocks.

Somehow, Mound, nothing that this bunch might be up to would surprise me.

I'm sure they're all pretty much gone now, Lorne, but the old "colonials" who ran the empire in India or Cyprus or anywhere else in that part of the world had an awful reputation as randy buggers.

Owen, what is that reference to 10 Downing?

A couple of weeks back, Mound, there was a story that David Cameron had called an emergency meeting to deal with a romance which had shocked his inner circle.

Word had apparently gone out that no details were to be revealed -until, perhaps, now.

Now I remember. Thanks, Owen. Yes, this could well be it. If so, it's hard to imagine that Blair will be able to duck it for long.

Yes, Anon, and so is he since his recent conversion. Maybe he'll enter the priesthood.

Anyone willing to marry Rupert Murdoch deserves to have ended up taking solace in, of all creatures, Tony Blair.