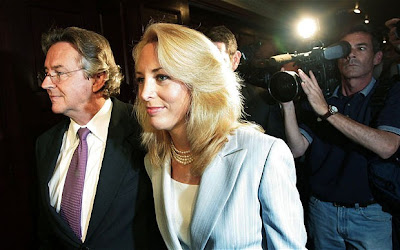 We got to know them when they stood defiant against the Bush/Cheney/Scooter Libby cabal over their government's cooked up claims about Saddam and his supposed arsenal of weapons of mass destruction.

Joe Wilson was the former diplomat who exposed the "yellowcake" claim to be bogus.  His wife, former CIA spy, Valerie Plame, was outed as a consequence, her career ended and her contacts put in jeopardy.

So what do Val and Joe think of the NSA's PRISM metadata scandal?  Plenty.

Prism and other NSA data-mining programs might indeed be very effective in hunting and capturing actual terrorists, but we don't have enough information as a society to make that decision. Despite laudable efforts led by Senators Ron Wyden and Mark Udall to bring this to the public's attention that were continually thwarted by the administration because everything about this program was deemed "too secret", Congress could not even exercise its oversight responsibilities. The intelligence community and their friends on the Hill do not have a right to interpret our rights absent such a discussion.
...We are now dealing with a vast intelligence-industrial complex that is largely unaccountable to its citizens. This alarming, unchecked growth of the intelligence sector and the increasingly heavy reliance on subcontractors to carry out core intelligence tasks – now estimated to account for approximately 60% of the intelligence budget – have intensified since the 9/11 attacks and what was, arguably, our regrettable over-reaction to them.

Today, the intelligence sector is so immense that no one person can manage, or even comprehend, its reach. When an operation in the field goes south, who would we prefer to try and correct the damage: a government employee whose loyalty belongs to his country (despite a modest salary), or the subcontractor who wants to ensure that his much fatter paycheck keeps coming?

On this spying business, officials from Director of National Intelligence James Clapper to self-important senators are, in effect, telling Americans not to worry: it's not that big a deal, and "trust us" because they're keeping US citizens safe. This position must be turned on its head and opened up to a genuine discussion about the necessary, dynamic tension between security and privacy. As it now stands, these programs are ripe for abuse unless we establish ground rules and barriers between authentic national security interests and potential political chicanery.

The irony of former Vice-President Dick Cheney wringing his hands over the release of classified information is hard to watch. Cheney calls Snowden a traitor. Snowden may not be a hero, but the fact is that we owe him a debt of gratitude for finally bringing this question into the public square for the robust discussion it deserves.

Plame and Wilson touched on an important issue that usually goes unnoticed - the emergence of an intelligence-industrial complex.

The bulk of American intelligence activity is now outsourced to private contractors, a bunch of them.   Not only has the U.S. government outsourced those jobs but, with that, it has absolutely lost the very skills base needed to do that work, leaving it dependent on and, hence, vulnerable to the private sector.  The U.S. no longer has the ability to perform many of its intelligence functions in-house.

Worse yet, by scattering its intelligence functions among a loose net of contractors, the U.S. government has left its intelligence apparatus far more vulnerable to infiltration and hacking by its potential adversaries.
Posted by The Mound of Sound at 9:12 AM

Good point Mound about "intelligence - industrial" complex.
However, I would argue that the name "military" should remain somewhere in the descriptor.
Because, use of military force, read WAR, is an ultimate end of such cabal.
P.S feel free to coin a better term than "intelligence, industrial and military" complex.