Shouldn't America Be Bombing Somebody? China? Russia? No, I Suppose Not. 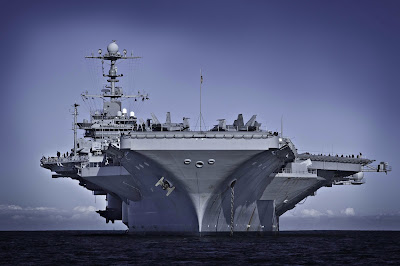 America does not abide insubordination and the defiant often find themselves on the receiving end of U.S. firepower.

Washington is practically seething over the ease by which fugitive Edward Snowden keeps eluding America's grasp.   First he made it to Hong Kong.  When American authorities tried to move on Snowden there, he simply hopped a flight to safety in Moscow.

Now there's word he's trying to make it to political asylum in Ecuador, possibly via Cuba.

U.S. Secretary of State John Kerry is reduced to muttering threats to Russia and China that there would inevitably be "consequences" for giving Snowden safe passage.   Consequences, really?  Like what?  Air strikes?  I don't think so.  Cruise missile attacks?  Can't see that either.

What we may be witnessing is the onset of "parity politics."  The U.S. needs China and, to a lesser extent, Russia about as much as they need it.  That rules out a lot of the Reagan-era playbook, mainly focused on the threat and use of military violence, that the U.S. relied on during its brief, Golden Era of global hegemony.

Ecuador foreign minister, Ricardo Patino, has described Snowden as a victim of persecution and further taunted Washington by adding that, if anyone has some explaining to do, it's the U.S. government and its spy agencies, not Snowden.

Ecuador, there's the ticket!  Finally, a place the United States can safely bomb.  Weigh anchor, fire up the carriers.  It's time for a serving of Salsa Smackdown.
Posted by The Mound of Sound at 9:53 AM

One more element of the Reagan era playbook was the use of economic threats (and rewards). And these were of as much strategic importance as its military. And those threats actually worked, for good and for ill.

If the whole western world were not simultaneously economically retrenching, and trying to limit the voice of governments (the people) in favour of the weaker voices of narrow-interest corporations, while at the same time watching both China and Russia expanding their international state-sponsored economic clout, people would pay more attention to what the US government says.

Great points, Chris. Thanks. It's disconcerting to watch America flounder this way.

Let's not forget that the US has not abandoned that economic playbook. Take for instance the situations of Syria and Iran. But it doesn't really have the might to do it unilaterally any more; it's had to armtwist the EU and various other countries into going along with its economic strangulation policies.

Meanwhile, the problem with bombing Ecuador is that Latin America has displayed increasing independence and cohesion. Yes, they could do it, but they'd start having problems with Brazil and Argentina, and two or three currently centre-right governments in places like Chile, or their pet govt in Honduras, might fall to lefty oppositions. Their pet opposition in Venezuela would lose all their momentum and look like traitors. And so on.

If they actually invaded, the members of UNASUR might leave the OAS en masse, and possibly even send troops to defend the place. Certainly the regional trend away from trade with the US and towards trade with China would accelerate.

IMO it's too late for the US to go back to direct military action in Latin America.