When you've got a super-secret technology, it's a good idea to keep it under wraps at least until you're ready to deploy the device.  It's a really bad idea for you to let your prospective adversary steal your secrets, especially early in the game.

“A lot of that is being stolen right now and it’s a major problem for us,” [U.S. defense acquisitions chief Frank] Kendall told a Senate hearing on development of the Lockheed Martin fighter, a so-called fifth generation aircraft capable of evading radar and integrated air defense systems.

“What it does is reduce the costs and lead time of our adversaries to doing their own designs, so it gives away a substantial advantage,” Kendall said.

“It’s the amount of time and effort they’re going to have to put into getting their next design and staying with us,” he added. “And as you’re probably well aware, at least two nations are well into developing fifth-generation aircraft right now, so that’s a concern.”

What nobody seems to want to talk about is how the F-35's target adversaries, the same countries now flying their own, remarkably similar stealth warplanes, Russia and China, are using all that stolen data to suss out exploitable weaknesses in the F-35 design and fragile technology.   Word is they're as busy on developing stealth counter-systems as they are on building their own stealth warplanes.

But, hey, Canada doesn't have to worry.   We've got these two right on this.  What could possibly go wrong? 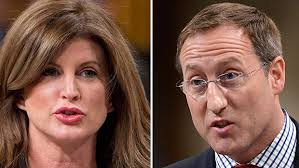 Thanks, Lockheed.  When I looked at the blog reports and found you had hit this site four times today with Rippers.0, I figured something must be up.  You guys can't help yourselves, can you?
Posted by The Mound of Sound at 12:22 AM

The upside is that we can hire skilled temporary foreign workers to maintain the F-35s at reduced wages. This could be a big selling point for the Harperites.

Yes, and we can have spare parts shipped over in containers on the same ships that bring in Wal-Mart's stuff.

What's actually a bit creepy is how the Chinese have modified the F-35 design to a twin-engine configuration. That's a huge improvement possible because they weren't constrained by the need to make a vertical landing variant.

Good point. The Chinese can use recycled electronics to produce cheap counterfeit F-35 replacement components. Another useful selling point for the Harperites - if they could even figure out that this fact might be a selling point.

I hope the Yanks don't connect the server containing designs to the internet next time round. Or was it an inside job?

No, Anon, this was no inside job. It involved a campaign of waves of hacks against the U.S. government, Lockheed, BAE, and other contractors. The Chinese (who else?) are said to have stolen reams of data and millions of lines of F-35 code, at least that the Americans will admit to.

And don't forget the Chinese also got their hands on the Lockheed stealth drone, the RQ-170, brought down apparently intact in Iran in December, 2011. That gave them samples of coatings and materials, information on construction techniques, plus the Chinese left Tehran with the onboard stealth electronics suite the drone carried.

All in all there's a good chance much of America's stealth mojo is gone and safely in the hands of the intended adversary which means 1) it can be copied, 2) it can be improved and 3) it can be used to develop counter-measures against Lockheed's stealth warplanes.

One technology the Russians and Chinese are targeting is the array of electronic windows on the F-35 via which its sensors create the aircraft's amazing electronic displays. The bad guys see this as an Achilles' Heel through which they can introduce corrupted code to disable the electronic functions, perhaps even bring down the aircraft. There are rumours this very sort of attack was used successfully in Iran to bring down the RQ-170 to a forced landing.