Why Canada Should be Wary of U.S. Missile Defence 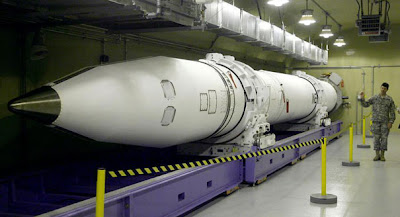 There has been talk that Ottawa might jump aboard the U.S. missile defence programme out of fear of a rogue missile launch from North Korea.

Before we do, let's make sure it works.   There are plenty of dirt cheap reasons to think otherwise.

America's hyper-expensive missile interceptors (does that sound familiar, ...cough, cough, F-35) are essentially untested.  Okay, they've been tested with reasonable success against target missile warheads.   They have not, however, been tested against the sort of warheads a 21st century enemy would use, warheads equipped with counter-measures, decoys.  From Reuters:

American scientists have repeatedly pointed out these weaknesses since the 1960s. Yet they have not been addressed, much less corrected.

He explained that the defense system is both costly and ineffective. If the missile interceptors can’t discriminate between the lethal object — the warhead — and the decoys, then limited (and costly) inventory is used up chasing fakes.

The Pentagon’s director of operational test and evaluation, Michael Gilmore, reaffirmed this challenge. “If we can’t discriminate what the real threatening objects are,” Gilmore said, “it doesn’t matter how many ground-based interceptors we have, we won’t be able to hit what needs to be hit.”

And what sort of high-tech countermeasures are involved?  You know those silvery balloons from your kids' birthday parties?  They'll do nicely.   Lightly inflated in the vacuum of space, they'll fly at roughly the same speed as the warhead itself, drawing missile interceptors off their target.   Balloons are dirt cheap while missile interceptors are very, very costly and in limited supply.

How did an untested and unworkable technology make it so far in the Defense Department procurement process? A recent Government Accountability Office report reveals that instead of flying before buying, the Missile Defense Agency has been doing the opposite. Its cart-before-the-horse methodology has resulted in “unexpected cost increases, schedule delays, test problems, and performance shortfalls.” (Sound familiar, F-35 fans?)

The agency’s “tests” are more like rigged “demonstrations.” The intercept team knows all the incoming missile’s parameters ahead of time — a luxury it won’t have during a real attack. Even with this, however, many “demonstrations” ended in dismal failure.

Unfortunately in a Canada in which our defence policy has been decoupled from our defence needs and, instead, has become politically driven (see Afghanistan War, failure of) we have developed a remarkable appetite for high-end junk that doesn't work.   Why does it feel like the Pentagon has become staffed by door-to-door salesmen?
Posted by The Mound of Sound at 8:25 AM

Reminds me of the Bomarc missles.

Actually, I think the Bomarc worked as advertised. There just weren't remotely enough of them to cover the area that needed protection. And then there was the small problem of their nuclear warheads that, once detonated, would blanket large parts of Canada in radioactive fallout.

Those cushy private sector post-retirement sinecures with the stacks o' moolah don't go to officers who don't play the game.