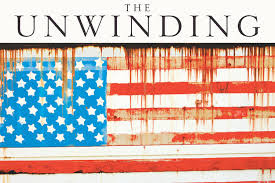 Has America come undone or has it simply reverted to its natural state as the inner sanctum of social Darwinism?  That's the subject of George Packer's new book, The Unwinding.

Packer discusses the question of whether today's America is the "real America" in an op-ed published in The Guardian.

In or around 1978, America's character changed. For almost half a century, the United States had been a relatively egalitarian, secure, middle-class democracy, with structures in place that supported the aspirations of ordinary people. You might call it the period of the Roosevelt Republic. Wars, strikes, racial tensions and youth rebellion all roiled national life, but a basic deal among Americans still held, in belief if not always in fact: work hard, follow the rules, educate your children, and you will be rewarded, not just with a decent life and the prospect of a better one for your kids, but with recognition from society, a place at the table.

This unwritten contract came with a series of riders and clauses that left large numbers of Americans – black people and other minorities, women, gay people – out, or only halfway in. But the country had the tools to correct its own flaws, and it used them: healthy democratic institutions such as Congress, courts, churches, schools, news organisations, business-labour partnerships. The civil rights movement of the 1960s was a nonviolent mass uprising led by black southerners, but it drew essential support from all of these institutions, which recognised the moral and legal justice of its claims, or, at the very least, the need for social peace. The Roosevelt Republic had plenty of injustice, but it also had the power of self-correction.

...The large currents of the past generation – deindustrialisation, the flattening of average wages, the financialisation of the economy, income inequality, the growth of information technology, the flood of money into Washington, the rise of the political right – all had their origins in the late 70s. The US became more entrepreneurial and less bureaucratic, more individualistic and less communitarian, more free and less equal, more tolerant and less fair. Banking and technology, concentrated on the coasts, turned into engines of wealth, replacing the world of stuff with the world of bits, but without creating broad prosperity, while the heartland hollowed out. The institutions that had been the foundation of middle-class democracy, from public schools and secure jobs to flourishing newspapers and functioning legislatures, were set on the course of a long decline. It as a period that I call the Unwinding.

...The rules and regulations of the Roosevelt Republic were aberrations brought on by accidents of history – depression, world war, the cold war – that induced Americans to surrender a degree of freedom in exchange for security. There would have been no Glass-Steagall Act, separating commercial from investment banking, without the bank failures of 1933; no great middle-class boom if the US economy had not been the only one left standing after the second world war; no bargain between business, labour and government without a shared sense of national interest in the face of foreign enemies; no social solidarity without the door to immigrants remaining closed through the middle of the century.

Once American pre-eminence was challenged by international competitors, and the economy hit rough seas in the 70s, and the sense of existential threat from abroad subsided, the deal was off. Globalisation, technology and immigration hurried the Unwinding along, as inexorable as winds and tides. It is sentimental at best, if not ahistorical, to imagine that the social contract could ever have survived – like wanting to hang on to a world of nuclear families and manual typewriters.

...Much has been written about the effects of globalisation during the past generation. Much less has been said about the change in social norms that accompanied it. American elites took the vast transformation of the economy as a signal to rewrite the rules that used to govern their behaviour: a senator only resorting to the filibuster on rare occasions; a CEO limiting his salary to only 40 times what his average employees made instead of 800 times; a giant corporation paying its share of taxes instead of inventing creative ways to pay next to zero. There will always be isolated lawbreakers in high places; what destroys morale below is the systematic corner-cutting, the rule-bending, the self-dealing.

...It is no wonder that more and more Americans believe the game is rigged. It is no wonder that they buy houses they cannot afford and then walk away from the mortgage when they can no longer pay. Once the social contract is shredded, once the deal is off, only suckers still play by the rules.