A Nation Vexed by Anti-Vaxxers? 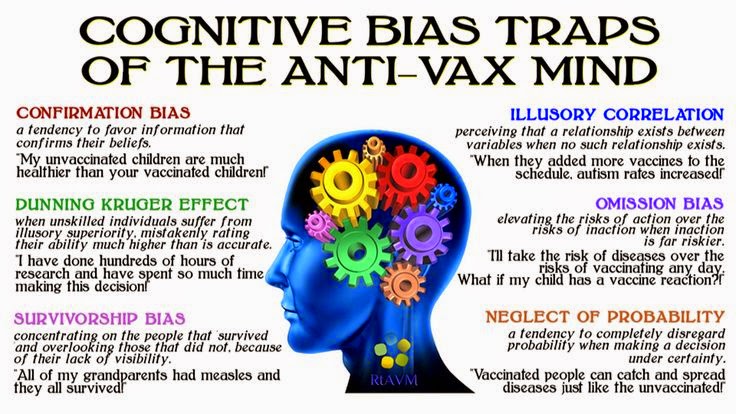 There's a cult in the United States that's come to be called the "Anti-Vaxxers." The term describes parents who prevent their kids from receiving ordinary medical vaccinations. They claim the vaccines are a greater threat to their children's health than the diseases they're intended to ward off.

A recent study found that these anti-vaxxers often live in clusters, such as California's Orange County, increasing the prospects for transmission of the diseases against which their children are unprotected.

For the most part the anti-vaxxers are liberals who have allowed themselves to lapse into belief-based instead of fact-based decision making.

Now they've been told to keep their kids clear of Disneyland where 51-measles cases have been linked.

..the deputy director of California’s Center for Infectious Diseases announced that the theme park is no longer safe for the unvaccinated — the status of over 80 percent of those infected. The outbreak has spread to five states and Mexico, and includes six infants who were too young to have received the vaccine. A full quarter of the patients so far had to be hospitalized. And for 24 unvaccinated children in Orange County, where the theme park is located, school is no longer safe, either: They were told to stay home for three weeks after it emerged that an infected student had shown up on campus earlier this month.

So what's considered "the most contagious disease in the world", measles is now spreading from a theme park and into schools and, obviously, into the general community because a gaggle of contrarian parents knew better than the medical professionals.

Don’t expect, in other words, that modern medical advances will protect us from the ravages of measles — vaccines are the modern medical advancement that were doing a fine job of things until the misguided decisions of a few sacrificed the protection of herd immunity for all of us. If anything, the rapid emergence of antibiotic-resistant superbugs could make a modern-day measles epidemic even deadlier. The continual frustration is that measles was effectively eliminated from this country in 2000, but all it took was enough people buying into the junk science telling them that vaccines aren’t safe to give the disease a new foothold.
Posted by The Mound of Sound at 8:33 AM

Anti-Vaxxing (if we can call it that) is only part of the modern preference of magical incantation and other nonsense over science. There is a huge growth in hell, fire and brimstone; alchemy and astrology instead of mathematics, chemistry and physics. It as if the sheeple have swallowed Hollywood's Kool Aid and can no longer distinguish reality from fiction.

This makes me want to suggest a media course be part of highschool. A course aimed at investigating marketing claims and baloney information, not saying things are right and wrong but at least be able to ask critical questions. People often laugh that I have a useless History degree, but the process helped me become a critical thinker. I despair at others with the same or higher level education who only learned to give the correct answer.
You have a right to be stupid, I'm just not sure you have a right to be stupid and injure others...

Careful, Tim, that sort of thinking leads to gun control.