"American Sniper" - to Chris Hedges, It's America's "Triumph of the Will" 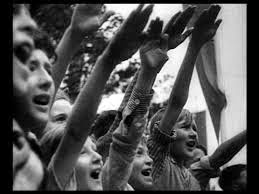 What does the Eastwood hit movie, American Sniper, say about America in the 21st century?  To Chris Hedges it says a lot, none of it good.

"American Sniper" lionizes the most despicable aspects of U.S. society—the gun culture, the blind adoration of the military, the belief that we have an innate right as a “Christian” nation to exterminate the “lesser breeds” of the earth, a grotesque hypermasculinity that banishes compassion and pity, a denial of inconvenient facts and historical truth, and a belittling of critical thinking and artistic expression. Many Americans, especially white Americans trapped in a stagnant economy and a dysfunctional political system, yearn for the supposed moral renewal and rigid, militarized control the movie venerates. These passions, if realized, will extinguish what is left of our now-anemic open society.

...There is no shortage of simpletons whose minds are warped by this belief system. We elected one of them, George W. Bush, as president. They populate the armed forces and the Christian right. They watch Fox News and believe it. They have little understanding or curiosity about the world outside their insular communities. They are proud of their ignorance and anti-intellectualism. They prefer drinking beer and watching football to reading a book. And when they get into power—they already control the Congress, the corporate world, most of the media and the war machine—their binary vision of good and evil and their myopic self-adulation cause severe trouble for their country. “American Sniper,” like the big-budget feature films pumped out in Germany during the Nazi era to exalt deformed values of militarism, racial self-glorification and state violence, is a piece of propaganda, a tawdry commercial for the crimes of empire. That it made a record-breaking $105.3 million over the Martin Luther King Jr. holiday long weekend is a symptom of the United States’ dark malaise.

...Kyle’s first kill is a boy who is handed an anti-tank grenade by a young woman in a black chador. The woman, who expresses no emotion over the boy’s death, picks up the grenade after the boy is shot and moves toward U.S. Marines on patrol. Kyle kills her too. And here we have the template for the film and Kyle’s best-selling autobiography, “American Sniper.” Mothers and sisters in Iraq don’t love their sons or their brothers. Iraqi women breed to make little suicide bombers. Children are miniature Osama bin Ladens. Not one of the Muslim evildoers can be trusted—man, woman or child. They are beasts. They are shown in the film identifying U.S. positions to insurgents on their cellphones, hiding weapons under trapdoors in their floors, planting improvised explosive devices in roads or strapping explosives onto themselves in order to be suicide bombers. They are devoid of human qualities.

...The culture of war banishes the capacity for pity. It glorifies self-sacrifice and death. It sees pain, ritual humiliation and violence as part of an initiation into manhood. Brutal hazing, as Kyle noted in his book, was an integral part of becoming a Navy SEAL. New SEALs would be held down and choked by senior members of the platoon until they passed out. The culture of war idealizes only the warrior. It belittles those who do not exhibit the warrior’s “manly” virtues. It places a premium on obedience and loyalty. It punishes those who engage in independent thought and demands total conformity. It elevates cruelty and killing to a virtue. This culture, once it infects wider society, destroys all that makes the heights of human civilization and democracy possible. The capacity for empathy, the cultivation of wisdom and understanding, the tolerance and respect for difference and even love are ruthlessly crushed. The innate barbarity that war and violence breed is justified by a saccharine sentimentality about the nation, the flag and a perverted Christianity that blesses its armed crusaders. This sentimentality, as Baldwin wrote, masks a terrifying numbness. It fosters an unchecked narcissism. Facts and historical truths, when they do not fit into the mythic vision of the nation and the tribe, are discarded. Dissent becomes treason. All opponents are godless and subhuman. “American Sniper” caters to a deep sickness rippling through our society. It holds up the dangerous belief that we can recover our equilibrium and our lost glory by embracing an American fascism.

.. that's an amazing article.. thanks for the link.

Matt Tabbi, too, reviewed this movie: 'American Sniper' Is Almost Too Dumb to Criticize.

@ Troy - thanks for the link. It was a good review. Chomsky has also addressed this film.