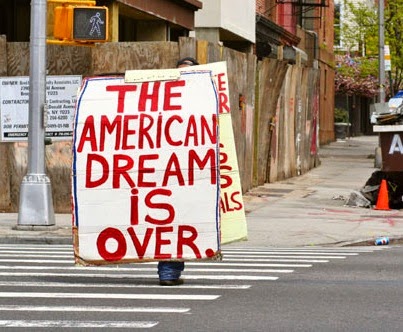 There's really no better way to understand another society that to live there.  I have never known the United States better than during the years I spent studying there back in the Vietnam war era.  This is why I was drawn to the observations of Volker Stanzel, former undersecretary of political affairs at the German foreign office.  Stanzel has just wrapped up a period of teaching at an American university on the west coast.  His impressions of the country, its people and their problems are insightful and should resonate with Canadians also.

Stanzel sees Americans as a people who look at their problems, shrug, and move on.


The immense creativity and boldness to be found in research institutions in the United States, in its universities, its enterprises and the power of its industry keep this country ahead of all others.

The country is still much more than its military hardware, contrary to the critics’ claims.

Yet, many conversations about where the country is headed, even in the U.S. itself, end with an implicit acceptance that if China and the other BRICS countries are rising, then that is how it is going to be, and there is not much that can be done about it. That acceptance then extends to the general condition the United States finds itself in.

Where one detects a clear decline is in America’s internal inability to get along with itself. It is a country characterized by internal strife – fiercer now perhaps than at any time since the Vietnam War – and by the lack of improvement in an important range of social conditions.

These shortcomings appear in healthcare, racial relations as well as electronic data surveillance encroaching upon individual freedoms. It is also characterized by the recognition that when America calls, the world does not necessarily follow.

These are challenges that a vibrant, confident United States would have gladly tackled, and treated not as obstacles to but as opportunities for improvement.
Today, the challenges are seen as obstacles or impasses, and they lead to resignation, and, worse, to withdrawal from public engagement – formerly one of the strongholds of American civil society.

The problems are certainly there, and they are not small.

...Instead of pulling together and overcoming whatever hurdles present themselves by aligning all domestic forces to get the job done, here again the response is just a shrug.

...A foreign observer like me wonders what it would take to provoke an effort to tackle a problem that is visible in so many small phenomena.
All of them seem to be remediable, be it housing and employment of African-Americans, underlying racism in White society, or violent protests that require new measures. The president has given a remarkable speech on the issue of race, to no more effect than fleeting marvel and faint praise.

...The NSA scandal, in the aftermath of the Snowden revelations, has led to profound, worldwide discussions about electronic monitoring of all human activity.

These discussions pertain to issues that used to be seen as the core of the American project, such as individual freedom and its limits, the social compatibility with what is technologically possible, and the responsibilities of enterprises compared to those of the realm of politics.

What is remarkable at this juncture is that these conversations in the United States about data control have largely remained confined to the sphere of intellectuals. There has been little effort to hold Congress accountable to implement at least the recommendations given by “The President’s Review Group on Intelligence and Communications Technologies” of December 2013.
The explanation given for why that is so usually elicits the rather resigned response that things never change anyway. It is seen as pointless to go up against Big Business or the security establishment. Once again, America simply shrugs.

Americans, as Stanzel sees them, have become a "meh" society.  Indifference and resignation reign in a society that would be unrecognizable to Americans from the pre-Reagan era.  They've been worked over, blinkered, indoctrinated, conditioned, manipulated and confounded, put at each others' throats, by those for whom the quest is immediate, short-term gain at the expense of both the nation and society.

The tragic part is that these same trends are alive and well in Canada today, albeit to a less spectacular degree. The ascendancy of corporatism and illiberal democracy, inequality of all forms, the erosion of social cohesion, these ills and many others all are fueled by our indifference and resignation.  Our complacency is a rich opportunity for those who understand how to exploit it.