Oh, This is Rich 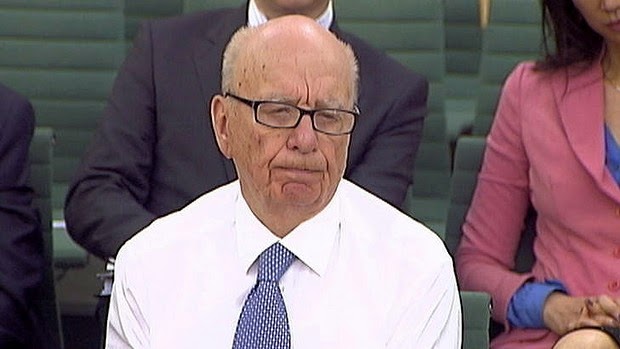 You might remember media mogul, 'Reptilian Rupert' Murdoch, as the guy who denied any personal responsibility whatsoever for the criminal enterprise he operated, the deservedly late News of the World.  For Rupe, the buck stopped just short of himself.  Right, you rotten old bugger and why haven't you taken a dirt nap by now anyway?

Now the crotchety old fart has come out to contend that all Muslims - the lot of them, the overwhelming majority of peaceful Muslims included - must share responsibility for the Paris massacre at Charlie Hebdo.

Bill Maher last night took his own shot at blaming the entire Muslim world for this outrage.

“Obviously, the vast majority of Muslims would never do anything like this,” said Maher. “But they share bad ideas. This is the thing that caused the big ruckus when Ben Affleck was here. Sam Harris said, ‘Islam is the motherlode of bad ideas,’ and everyone went fuckin’ nuts on this side of the panel. But it is. These two guys who shot up the cartoonists the other day, they were avenging the prophet, they said? A bad idea. Martyrdom? A bad idea. Women as second-class citizens? A bad idea. And unfortunately, the terrorists and the mainstream share a lot of these bad ideas.”

I guess by Maher's logic that would make him personally responsible for every Afghan wedding brought to an abrupt end by a Hellfire missile launched by some bored guy sitting in an air-conditioned trailer 20-miles down the road from Vegas.  Of course Maher is quick enough to criticize that sort of thing but he seems not to hear the criticism of moderate Muslims who denounce atrocities like the Paris massacre.  To him they're all steeped in these same extremist ideas. Except that, if they were the people Maher makes them out to be, he wouldn't be alive today.

In defence of Bill Maher he is a long time atheist and consistent in his denigration of all religions. His comments last night offered nothing he hasn't said before.

There are certainly many Muslims criticizing terrorism although they get little help by popular media. Most terrorist attacks by Muslims kill other Muslims so, of course, there are critics. There are also those who recognize that terror against mainstream society (whichever mainstream society) brings repercussions. Still, it is irrefutable that a portion of the Muslim world has chosen to kill and maim so called soft targets. I tend to believe that fanatics are moved more by politics than religion but, regardless, it adds up to a lot of bloodshed for nothing.

We've seen terrorism manifest in several forms. This is fundamentalist religious terrorism but it pales compared to the slaughter exacted by ethnic or ideological divides. How many "liberation" movements did not resort to terrorist tactics that claimed the lives of countless thousands of innocents? Isn't ethnic cleansing inherently reliant on the use of terrorism? The Serbian massacres of Kosovor Albanian Muslims were terrorism in action. You could say the same for the siege of Sarajevo. The Biafran war was replete with terrorist atrocities. The list goes on and on. A good many of the 5-million butchered in the DRC lost their lives to terrorism while we yawned.

Provided the victims of terrorist carnage are not "of us" we can tolerate their slaughter remarkably well. Yet when it comes to attacks on Western folks, well by God that's diabolical and we respond with hysteria.

Not much is being said about the latest Boco Haram massacre in Nigeria, so many dead they stopped counting the corpses. Is that not radical terrorism? Are those lives not worth saying Je Suis Nigerian? Millions slaughtered in Africa and we make a bigger deal out of 12 dead (not that we shouldn't acknowledge it, but the massive outpouring is really disproportionate). Says a lot about the big problem we have with "of us".

No shit BC water boy.