My Paper is Better than Your Paper 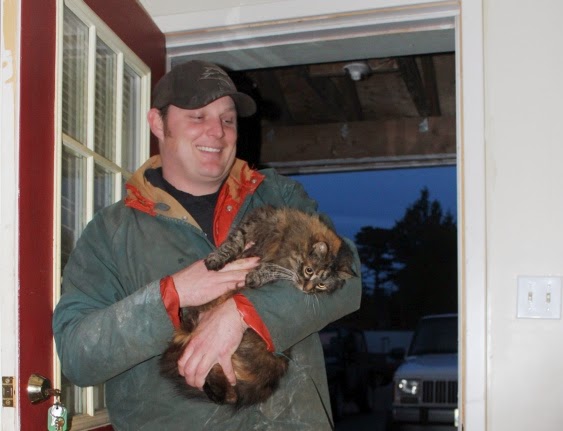 I came to understand how much I appreciate picking up the Times Colonist from my doorstep when I brought in this morning's edition.  I fully expected the front page to have something splashed about the Charlie Hebdo massacre.  Hey, if it bleeds it leads, eh?  And just yesterday our closet queen prime minister bellowed how we're all at war with the jihadists who are lurking in our garages just waiting to detach our heads.

So what was featured on the front page of the TC?  A major report about a fellow from Ucluelet who encountered a cougar in his livingroom.  The cougar had followed Ted Benson's pet cat, Mushka, through the front door looking to have its smaller cousin for dinner.There was one other story about an island family that has to fork out almost $50,000 after their son accidentally set off his school's sprinkler system.

Charlie Hebdo?  That was inside on page A2.  As for the prime minister's call to arms, that made it on the back page of the front section, A14.  Most of the back page was taken up with an advertisement for a sale at a high-end audio-video shop.

It's not unusual to find the TC's lead story a review of a memorable concert the evening before.  Tony Bennett the lead story?  Yes, and that's wonderful - to me at least.

One of the things about living on Vancouver Island, especially well beyond Victoria, is the sure and certain knowledge that you've got far more to fear from cougars than you do from any errant son of Allah.  I've had a couple of close encounters with them.  My daughter spotted one in repose on a tree branch, presumably waiting for a deer dinner to pass unwittingly beneath.  A friend has a 5-acre property outside of town which features a brook and two paths, one frequented by black bears, the other by cougars.  In other words, cougars are far more interesting and newsworthy than a couple of wastrels caught up in radical Islam or a cowardly prime minister who whines about them.

By the way, here's a mental image for you.  Captain Canada, face to face with a cougar, and not a single broom closet for miles.  Can you say ugly brown stain?

Ugly brown stained pair of ragged trousers surrounded by a spread out red stain with a pair of spectacles floating in it.

There. I may sleep again.

Sad as it is, Dana, you're right. These cats can really smell fear and, in this situation, that cat would be all over Harper in an instant.

Gosh Mr. Disaffected Lib you sure know how too make someone laugh. I can visualize Harper chicken shit war hawk coming face to face with something other than a kitty.

I lived on the "Isle" Vancouver Island that is and worked for the Louie brothers who inherited London Drugs. I worked for their London Enterprises branch building their Sonora Island Resort.

That is where I heard of their third branch London Air and the only reason we have never heard about it is because you have to be a millionaire to be able to afford fly on it.

And apparently it is our dear leader Christy Clark's favorite mode of transportation.

The size of the Eagles were amazing I was working next to a nesting couple hatching eaglets and to my pleasant surprise they can sing better than canaries. I'm six foot one and three quarter inches I got to see them up close and personal they were huge. They were the same size from head to tail as me from head to butt. The Orca pods were amazing as well. A native fellow clued me in Orca does not mean "Killer Whales" they are after all a member of the porpoise family. In their native tongue Orca meant Killer of Whales because as they noted a pod could easily take down a Whale for a feast. Mostly their diet is Salmon like the Bald Eagle.

Any how you gave me a good morning laugh along with these good remonitions .