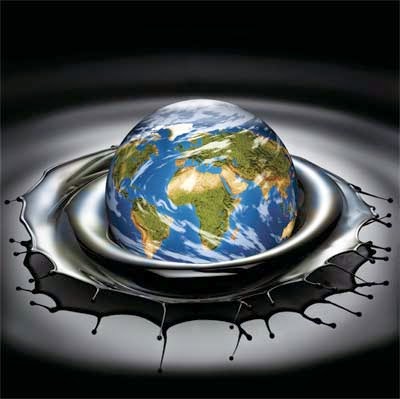 Mankind is coming to a decision point.  We can either walk away from high-carbon fossil fuels, leave the stuff in the ground, and keep our fingers crossed that somehow we'll stay within the 2-degree Celsius target cap for global warming this century or we can stay the current course and usher in a catastrophic 5C of warming.

There is an range of fossil fuels with significant differences in their individual carbon footprint.  Natural gas, if you can ignore the disastrous leakage loss problem, is cleanest.  Sweet, light crude oil of the sort that's pumped out of wells in the Middle East is the runner up.  Then you get into unconventional (seabed) and heavy tar/oil (Athabasca) that require a lot of carbon-intensive energy to extract and process.  Coal comes in last.  It's bloody awful.

We know that if we're to have any chance of making the 2C target, somewhere between two-thirds and four-fifths of known fossil fuel reserves will have to be left underground.  Even the Globe & Mail finally gets that.

A new analysis of world-wide fossil fuel resources concludes that, as far as the contentious Keystone XL pipeline is concerned, most of the bitumen that pipeline is meant to carry needs to be left underground in Athabasca.

Advocates of Keystone XL point out that the oil sands are not as large a contributor to climate change as other fuel reserves elsewhere in the world, particularly coal. The study does not disagree with this assessment, but makes clear that a concerted global effort will be needed to maintain at least a 50-per-cent chance of staying under the two-degree limit – a goal agreed to by the majority of nations, including Canada, under the 2009 Copenhagen accord.

As previous studies have already shown, roughly two-thirds of fossil fuels that can already be extracted at a competitive price will need to remain unburned before 2050 to achieve this goal. The new analysis shows that in order to optimize costs and benefits, that two-thirds cannot be evenly distributed around the world, but must be skewed toward more carbon-intense fuels situated far from potential markets. The computer model suggests that it will be next to impossible to meet climate targets if those fuels are tapped to a significant degree, even as producers continue to develop these reserves.

“I think the most sobering thing from this study is the gulf that it reveals between the declared intention of the politicians and the policy-makers to stick to two degrees, and their willingness to actually contemplate what needs to be done if that is to be even remotely achieved,” said Paul Ekins, a co-author of the study.

In broad terms, the analysis reveals that meeting the two-degree limit will require the curtailing of coal burning to the extent that 82 per cent of global reserves, primarily in the United States and the former Soviet Union, should stay in the ground. Natural gas, which is less carbon-intense, is the most favourable fuel in the analysis. The authors stress that gas will be essential in the transition to a low-carbon future.

Oil occupies a middle ground in the study, but as the optimized model shakes down, Alberta’s oil sands end up largely unused.

The analysis is a big step in compelling two-faced politicians to declare whether they want to preserve the world for future generations or continue to exploit high-carbon fossil fuels.  They've got to choose - profits for the oil giants today or a livable future for your grandkids.  They'll duck and weave and lie through their teeth but it's enough to know that, if they don't acknowledge that the tar sands have to be left in the ground, they're voting against your grandchildren.  It's really that simple, that cut and dried.  And that doesn't just go for Harper but equally for Trudeau and Mulcair.

So it comes down to you.  It's the Ralph Nader Conundrum.  Do you support a pair of closet fossil fuelers to get rid of Harper and support people who don't have the courage to stop the ruin of your grandkids' future or do you finally say "no, not until you change?"
Posted by The Mound of Sound at 5:24 PM

In a world dictated by partisan politics , I doubt this thread will attract much input.

The article would seem to be the truth, the whole truth & nothing but the truth.

Trailblazer, I have to admit to being personally torn on this one. I have a daughter of 31 about to get married and she and her beau are eager to start a family. I've told them it's their decision and that I'll be content so long as they consider all the circumstances. It's not my place to go beyond that. However, assuming that kids it will be, I can't vote for someone who doesn't place my grandchildren's fate tomorrow ahead of Big Oil's and the Alberta government's interests over the next few years.

The science is in, conclusively. The writing is on the wall. Bitumen is one of those high-carbon fossil fuels that for the benefit of the world - and my and everyone's grandchildren - has to be left in the ground. At this point we don't have time left to us for fine points, support for this pipeline and opposition to that one. The battle line is at the bitumen pit edge, not "tidewater" or any of that nonsense.

Note in the 2010 diagram for Canada, the very large potential energy of the Uranium exports. (The energy export the press never reports.)

An interesting point in this diagram is that the potential energy of the uranium is calculated on the assumption that it will be used in a once-through enriched uranium light-water energy cycle, which is the case: since most of the reactors in use today are of such a type (Candus being a slightly more efficient exception).

But a breeder-cycle reactor, depending on the technology, can use uranium at up to 100 times the efficiency of a light-water cycle. If the world were using breeder reactors the same mass of uranium would, represented in that diagram, dwarf quite considerably all other energy sources in Canada.

(Of course, in such a scenario, Canada may not need to mine or export as much uranium. It is just an illustration of how much potential energy is available from that resource, if the humans from Canada wish to help unlock it.)

What has the Green party said about using Fossil Fuels? What would they do with them if the were to magically win a majority government?

Chris, as you're knowledgeable in this, what is the state of development of fast reactors, the sodium type? With their promised ability to "burn" the radioactive energy remaining in "spent" fuel rods plus weapons-grade materials I had thought they could not only generate clean energy but also rid the world of a serious storage/disposal problem.

As for the chart, I found the complexity a tad overwhelming.

And what do I fill up my car with? How do I visit my sisters in Manitoba and my son in Alberta? How will planes fly? - Electrically?

I think its pretty clear something big is in the pipeline, and its not fossil fuels.

Even without a game changing new tech, Denmark is already producing nearly 40% of its electric power from the wind.

If you want a daily dose of good news read that blog.

The chart is called a Sankey diagram. It is a neat visual way of documenting energy flows through a system.

As for your question about the 4th gen reactors. I don't really know at what scale and how quickly they'll be deployed. Their basic designs, and assumed deployment, has been present since the very start of the nuclear power industry. (It was assumed at the dawn of the nuclear age that Uranium was much rarer in Earth's crust than turned out to be case, and also that fossil fuels were less abundant, so that breeder reactors would need to be developed and deployed throughout all industrial economies quite quickly, certainly during the early part of the 21st century.)

Richard Nixon had an energy plan where by year 2000 a mix of conventional and fast reactors would be supplying about 1/2 of the US's electrical energy. That didn't come to pass, for many financial, political and technical reasons. It's pretty hard to predict the future. Other nations (France, Germany, Japan and Russia) which made plans for 4th gen reactors have also not seen them develop as originally envisioned. Abundant fossil fuels, fires, accidents, terror attacks, incompetance & political turmoil played their roles.

The integral fast reactor: the end result of the program of nuclear energy research Nixon mentioned in his speech to congress:
http://en.wikipedia.org/wiki/Integral_fast_reactor

@ Anon 8:47. There will obviously need to be a transition period as we move off fossil fuels. That said, there are more than enough lower-carbon fossil fuels to meet that need. Yes, eventually we will need to change the way we transport ourselves and our goods - trains in lieu of trucks, electric or hydrogen cars instead of gasoline/diesel fueled cars. As for planes, the European giant, Airbus, already has experimental electric planes flying.

The question you need to ask yourself is what really matters - your personal transpiration convenience of a livable future for your grandkids.