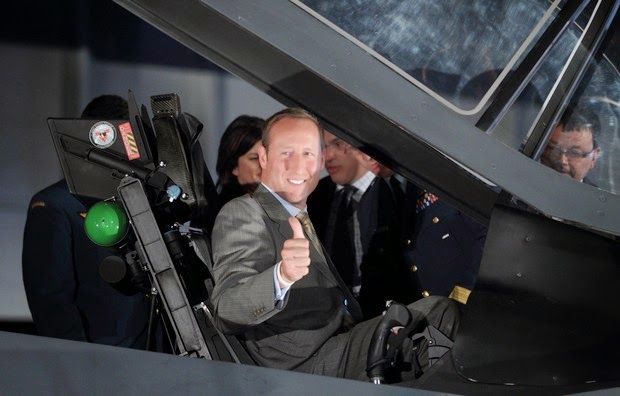 Just like every other US client state (except us, for now), Israel was quick to sign up to buy the Lockheed F-35 light attack bomber.  The Israeli air force inked the papers for 19 of Lockheed's controversial warplanes and then went back to the trough to order another 32.  At this point something quite curious happened. Powerful voices such as the Minister for Intelligence Yuval Steinitz, began asking some very awkward questions.

The opposition's stand was related to Aviation Week by a senior Israeli official:

"For maintaining stealthiness, this aircraft has compromised maneuverability, shorter operational range and significantly less payload capability.  ...We shouldn't be buying so many of them when it is unclear whether the stealth is effective, or there is a countermeasure that would negate it.  There are vast gaps in performance between the [fifth-generation] F-35 and fourth-generation fighters."

As the opposition turned tenacious a deal was brokered that will see Israel's follow-on buy cut from 32 to 13-aircraft.

When the head of Israeli intelligence calls out the F-35 for its compromised maneuverability, meager operational range and limited payload and questions whether its supposed stealth cloaking even remains viable then Canada needs to listen and get some answers before we too leap into the F-35 pit of uncertainty.

Nice picture of Peter Mackay the chickenhearted useless warrior like his counterpart hide in the closet Harper...