Is It Only Terrorism if White People are Attacked? 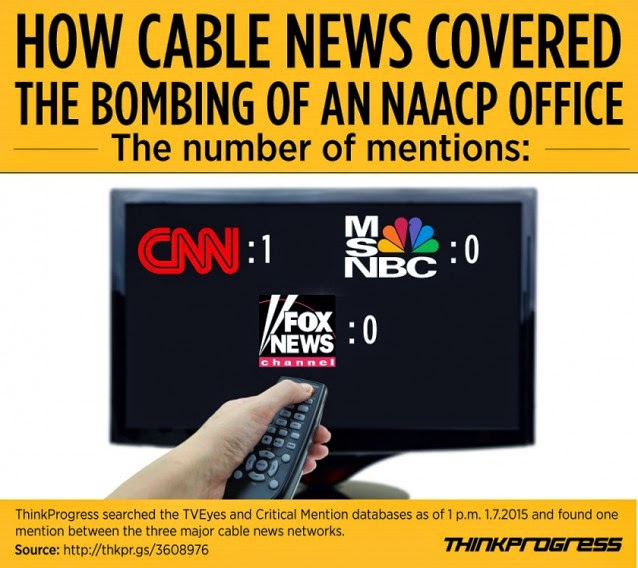 There was an act of domestic terrorism, an attack on the Colorado office of the NAACP, on January 6th.  You probably never heard of it.  That's because the media didn't cover it.

A bomb, consisting of an explosive device attached to a can of gas, went unnoticed in America's mainstream media.  That is until word leaked out on Twitter and the story went viral.  The outrage became more than the media could take and so they belatedly and obviously reluctantly ran the story.

Reluctantly?  That's certainly the impression you might get from reading the first graph of the USA Today report:  The hashtag #NAACPbombing has gone viral, reflecting frustration among one of Twitter's most vocal communities about what they say is a glaring disparity in how news outlets cover violence against blacks.  Most vocal?  You could easily substitute "uppity" for most vocal.

The cops are looking (we hope) for a suspect described as a balding white male in his 40s driving a dirty white pickup truck.  Good luck with that, cops.

And, if you need another bite of batshit crazy American racism, consider this performance from, what else, FOX.

A general rule of thumb I've come to believe in is when the "terrorism" is media hyped, it's a blacktop with the purpose of furthering the security state agenda. When the media tries to ignore it, it's real, outside of the state's control.

All the world's a stage.

I expect there's a good measure of fact in your assumptions, Richard. People like our own prime ministerial closet queen don't hesitate to use these incidents to fuel their fearmongering. He knows there are plenty of voters who will fall for it.

Honestly, I think it was just the fact that the bomb plot failed and no one died or got hurt. The fact that some of these things get more attention than others doesn't prove anyone's delusions that their is a vast work of Government conspiracies behind the ones that do get attention. They'll just cover the ones that have the highest death toll and hit closet to home (home often meaning white and middle-class). That's why they don't spend much time covering car bombs in Afganistan or wherever. And yes, politicians like to use events like what happened in Paris for their political advantage. That doesn't prove they were some how secretly behind them.

I can see that the Colorado incident doesn't compare to the Paris massacre but, given all the other drivel that goes into an American (or, for that matter, Canadian) newscast it's inexcusable that this, blatantly racist hate crime, received virtually no coverage. Only when it went viral did the networks find it newsworthy - and they did.

And I don't know where you conjured up the idea that anyone is claiming the political hacks are "secretly behind" this.

Richard posts about "black ops" clearly says that he thinks that when something like a terrorist attack gets a lot of attention, it's for the purpose of furthering state control. That clearly implies to me that he thinks someone in Government is behind it. And you seemed to concur with that notion. I admit, I may have misunderstood what both of you were trying to say, but that's what it sounds like to me.

I see what you're saying. I was agreeing with Richard to the extent of the fairly obvious exploitation of the situation by our neoliberal government. Beyond that, I've seen nothing to suggest that any government, Western at least, had anything to do with the Paris massacre.