When the Shooting Starts, It'll Probably be Here

Sure this is a bummer to start the new year but arms races are a major cause of war, often unintended and undesired.  It's not just the country buying all the new hardware that starts this sort of war but also the country that fears it will be even more vulnerable in the years ahead so it might as well take its best shot now and hope for a favourable peace settlement.  That thinking, after all, was instrumental in Japan's decision to attack US bases in WWII.

This same dynamic is in play now across Asia.  India fears Pakistan.  Pakistan fears India.  Everybody fears China.  Everybody is buying advanced submarines as quickly as they can come off the ways.  Aircraft?  A seller's market.  Even the city state of Singapore, population 5.4-million (well shy of the Greater Toronto area), spends 9.8-billion on defence, almost half Canada's total expenditure. 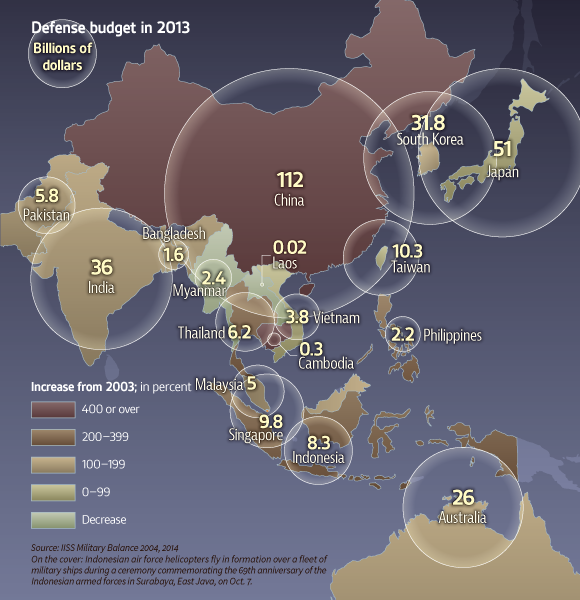 Well you are quite correct and history proves you so. Sigh every time in the past history a major military build up happened it led to a major war. We are f**ked WWIII is coming down the tubes. And we have no choice in the matter. Um the so-called armed Isis that walked into Parliament Um what? How did he get past Parliamentary Security? Turns out his rifle had no bullets and he had none on his body. He had a history of mental illness. Sigh again instead of arresting him and taking him to a mental treatment center they shot him to death when he was physically unarmed. Come on you must have bullets for your rifle before you are armed?

And Harper immediately said the guy is an ISIS terrorist sent to kill me Harper your mom should have had an abortion. Good luck in the new year Harper because I don't think you are gonna find it and good bye.

We have all seen those newscasts from the Third World wherein some kid is carrying a weapon worth several times his monthly food budget. I wince every time I see it.

I am sure that arms dealers spread weapons around cheaply knowing that someone will start shooting and that someone else will have to buy more weapons at higher prices.

Sam Colt happily sold his 45 to both sides in the US Civil War. Standard practice.

What a bloddy cultural wasteland. We're
in the 21st century and more then ever countries are rearming and planning for war. Farley Mowat was right. "The world is run by psychopaths"

Pam you are so right on Farley's book "Never Cry Wolf" I never forgot to this day. The Canadian Government wanted an excuse to slaughter all wild wolves. Just like the dumb and dumber Alaskans. He was a Canadian wildlife biologist who studied the real life of the wolves and found that their staple diet was mice. Oh my god what a threat...

There are news reports out of Asia today that China is proceeding with development of a Western-style nuclear ballistic missile sub. Thailand is also planning to deploy three advanced propulsion diesel boats this year. Vietnam expects to have six, modern-variant, Russian Kilo subs with long-range cruise missile capability (target, China) this year. The city state of Singapore wants to expand its submarine fleet from four to six boats this year or next. Australia is preparing to replace and expand its fleet of U-boats. There'll be well over 200-operational submarines for that region from the Indian Ocean to the South China and Japan Seas. Makes you wonder how long before they start banging into each other.

I think the old diesel/electric subs like my dad served on in WWII are much safer...

I'm still a bit skeptical about the Indian subs, Mogs.

And the "old diesel/electric subs" of your dad's era are now obsolete. They've been overtaken by AIP "air independent propulsion" units that can allow a conventional, non-nuclear sub to prowl submerged for weeks without surfacing. Canada may be the last Western country operating subs that still closely resemble those from your dad's era - if we can ever make them seaworthy.

MoS China already has them with nuclear missile capabilities and if Harper does not shut his clap trap oh my?

Get prepared it is either a global financial meltdown or WWIII? Either way no win for us.
Sheesh why did I choose to get born and find this? Should I build my own nuc just to be part of "The Club"? No because there is to many out there allready to turn Earth into either a Mars or a Venus. No more butifull rich flora and fauna enjoy while you still can man!

I have with great trepidation actually prpared for worse case senario. Wish it will not happen. The futures not mine to see kaysera sera... Etctera...

Singapore has Malaysia and Indonesia to keep honest.