Is Harper Collaborating With the Saudi Princes to Crush Their Shiite Minority? 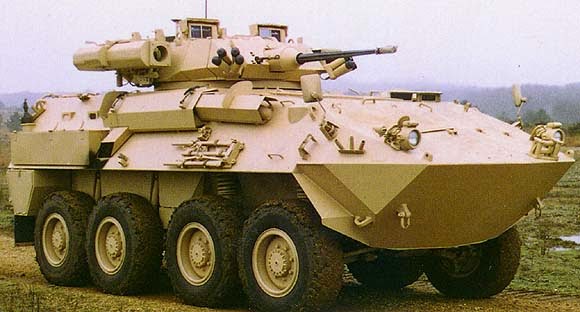 Stephen Harper is beginning to catch a bit of flack over the sale of 15-billion dollars worth of Canadian-built light armoured fighting vehicles to Saudi Arabia.

At first blush it's hard to understand what Saudi Arabia, that already has a significant armoured force but shows no inclination to use it except to suppress pro-democracy dissidents in places like Bahrain, wants with those LAVs.  Maybe it's got something to do with this, the simmering religious conflict between the Sunni House of Saud and Shiite Iran.  Could the Saudis be gearing up to crush their own Shiite minority?

This was not an ordinary criminal trial, even considering Saudi Arabia’s liberal use of capital punishment. Among other charges, the prosecutor sought to convict al-Nimr of “waging war on God” and “aiding terrorists,” even calling for the cleric to be publicly executed by “crucifixion.” In Saudi Arabia, this rare method of execution entails beheading the individual before publicly displaying his decapitated body.

The widely revered Shi’ite cleric was ultimately convicted of “disobeying” the king, waging violence against the state, inviting “foreign meddling” in the kingdom, inciting vandalism and sectarian violence, and insulting the Prophet Muhammad’s relatives. However, al-Nimr’s family and supportersclaim that the ruling was politically driven and insist that the cleric led a non-violent movement committed to promoting Shi’ite rights, women’s rights, and democratic reform in Saudi Arabia.

In early 2011, anti-government protests erupted in the Qatif district of Saudi Arabia’s Eastern Province, which is home to nearly all of Saudi Arabia’s 3 million Shi’ite citizens and nearly one-fifth of the world’s oil supply. Throughout 2011 and 2012, al-Nimr was a leader in these protests, in which activists demanded the release of the “forgotten prisoners” — a reference to nine political prisoners who had been detained then for some 16 years.

After Saudi Arabian, Emirati, and Kuwaiti forces entered Bahrain to help quell a non-violent Shi’ite uprising in the tiny island kingdom, Saudi Shi’ites expressed solidarity with their Bahraini counterparts. This prompted officials in Riyadh to fear that growing Shi’ite dissent could trigger a crisis in the strategically vital Eastern Province, which borders several other countries with sizeable Shi’ite populations. So between March 2011 and August 2012, the Saudi government waged a harsh crackdown on Shi’ite protestors, killing over 20, injuring several dozen, and detaining over 1,000 others, including 24 children.

When you supply 15-billion dollars worth of armoured fighting vehicles to a gang of double-dealing cutthroats like the House of Saud, you're complicit in whatever they do with them.  Prominent Saudis like Prince Bandar bin Sultan have openly stated that the Saudis are gearing up to exterminate Shia Islam.

Some time before 9/11, Prince Bandar bin Sultan, once the powerful Saudi ambassador in Washington and head of Saudi intelligence until a few months ago, had a revealing and ominous conversation with the head of the British Secret Intelligence Service, MI6, Sir Richard Dearlove. Prince Bandar told him: "The time is not far off in the Middle East, Richard, when it will be literally 'God help the Shia'. More than a billion Sunnis have simply had enough of them."

Not only that, but an organization in close cahoots with General Dynamics - the builders of these machines - is a registered charity that essentially lobbies the federal government for defense contracts and political gain.

and here:
http://en.wikipedia.org/wiki/Canadian_Defence_and_Foreign_Affairs_Institute
Why aren't they being audited by the CRA for mixing politics and charity?

Why? Maybe because the Canadian Defence and Foreign Affairs institute is brokering sweet deals for the journalists that are supposed to be investigating them?

The more I see of Stephen Harper's performances here and abroad, the more I'm convinced that he spends his days in front of a mirror in a secure closet on Parliament Hill, practicing PR scripts handed to him by multinational corporations.

(New google CATPCHA is making it exceedingly difficult to post comments. But maybe that's the point?)