What's a Single Issue Prime Minister to Do? 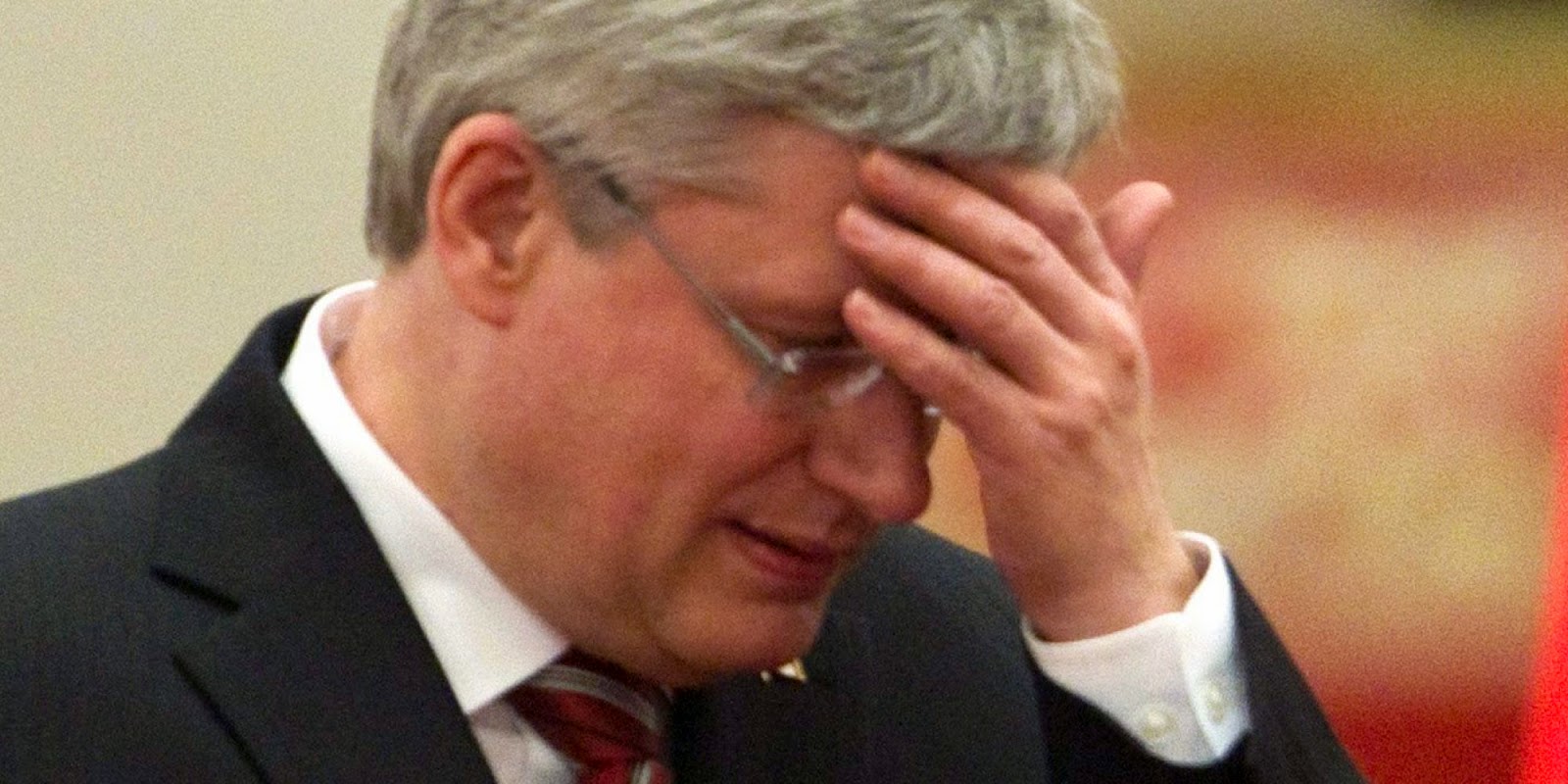 These are not good times for Canada's petro-prime minister.  Harper's Holy Grail, Canadian energy superpowerdom, has sprung a leak.  Even The Globe & Mail, says bitumen no longer makes any economic sense.

If $40 a barrel still seems a ways off, consider that the benchmark price for oil sands crude is already trading in that price range. What’s more, if production from high-cost sources isn’t withdrawn from an oversupplied market, oil prices may soon be trading even lower.


The first thing Canadians should recognize about the new world order for oil prices is that – contrary to what we’re being told by our federal government – the economy is no longer in dire need of any new pipelines. For that matter, it can live without the new rail terminals being built to move oil as well. Yesterday’s transportation bottlenecks aren’t relevant in today’s marketplace.

At current prices there won’t be any massive expansion of oil sands production because those projects, which would produce some of the world’s most expensive crude, no longer make economic sense.

The recent spate of project cancellations by global oil giants – Total’s Joslyn mine, Shell’s at Pierre River, and Statoil’s Corner oil sands venture – is only the beginning. As oil prices grind lower, we can expect to hear about tens of billions of dollars of proposed spending that will be cancelled or indefinitely postponed.

...If plunging oil prices are writing a boom-to-bust story in provinces such as Alberta, Saskatchewan and Newfoundland, the narrative will be much different in other parts of the country.

Ontario’s long-depressed economy is already beginning to find a second wind, recently leading the country in economic growth. And the engine is just beginning to rev up. As the largest oil-consuming province in the country, lower oil prices put more money back into the pockets of Ontarians, while also juicing the buying power of its most important trading partner. Ontario’s trade leverage with the U.S. is set to become even more meaningful as the Canadian dollar continues to slide along with the country’s rapidly fading oil prospects.
Just as the oil sands boom turned Canada’s currency into a petrodollar, pushing it above parity with the greenback, the loonie is already tumbling in the wake of lower oil prices. And it shouldn’t expect any help from the Bank of Canada, which continues to signal that it’s willing to live with a much lower exchange rate in the face of a strengthening U.S. dollar.

A loonie at 75 cents means GM and Ford may once again consider Ontario an attractive place to make cars and trucks. Even if they don’t, you can bet others will. With the loonie’s value falling to three quarters of where it was only a few years ago, we’ll start seeing Ontario, as well as other regions of the country, start to regain some of the hundreds of thousands of manufacturing jobs that were lost in the last decade amid a severely overvalued currency.

Yes, kids, that was the very conservative Globe & Mail admitting that Eastern Canada has for years been afflicted by the Athabasca-borne "Dutch Disease."  Harper, Oliver, Flaherty and the rest of the parliamentary clown car have expended massive energy in denying it but Alberta's wealth (the money they've long since 'pissed away') has hurt Canada's manufacturing sector and the hundreds of thousands of workers that lost their jobs.

The tarsands industry would not have been economically viable had it not been for the annual $34B taxpayer subsidy: http://thetyee.ca/Opinion/2014/05/15/Canadas-34-Billion-Fossil-Fuel-Subsidies/

(a) this amount ($34B) is comparable to the annual federal health transfer amount to the provinces, and

(b) how much profit the energy industry must have made when oil prices were north of $100 per barrel?

This is the crux of the matter. Harper and his Reform supporters are against corporate welfare but they have no problems subsidizing what is essentially an economically nonviable industry. Why? Perhaps because these people must be benefitting tremendously from the energy industry.

Even the Conservative water carrying Globe & Mail seems to be admitting the fact that the tarsands industry is economically nonviable.

I don't think you meant to that Harper & Co. oppose "corporate welfare." What they want to trample is social welfare in all its varieties. Corporate welfare - via tax relief, subsidies and deferrals - is just fine with them.

If the Loonie really plunges and Ontario's manufacturing sector rebounds it'll be problematic for Harper because it will prove that Dutch Disease is very real.

The plunging loonie will be a double whammy for Harper. Private sector economists (at least, the more believable ones) are already predicting that Ontario's GDP will be higher than Alberta's in 2015 if the oil price stays low.

Wait till Albertans realize that Harper and Flaherty had tied the amount of health transfer to the provinces to the growth in GDP. At this rate, Ontario will get a bigger increase in health transfer than Alberta, totally the opposite of what Albertans must have cheered for, eh?

Money talks - but only until money walks.

The predictable response, Mound, of the Harper propaganda machine, will be simply to ignore economic reality and continue stressing the need for pipeline construction. Perhaps there will be even more exaggeration of a pipeline's job-creating potential, but expect Harper et alia to cede nothing to the reality of their failed policies.

I wonder how Harper will react if private capital retreats from the pipeline initiatives? Will the feds (perhaps in conjunction with Alberta) come up with government subsidies for pipeline construction? Fascinating, eh Lorne? An Ontario recovery would cause the Harper Cons enormous problems across the East.

Mound Lorne and Anon I personally do not believe the pipelines will be built it is a gut feeling. Mr. Rich Warren Buffet also known as Mr. stock market investor recently pulled all his cash out of wall street/stock market. He bought railroads and trains. IE rolling stock hard assets instead of paper [stocks bonds money]! Now he apparently read the signals that something terrible financially is coming our way and prepared by buying tangible assets. Banks are gonna fail so if you have cash in them you snooze you lose.

I am reading a fascinating book called "The End of Money" by Jim Rickards who was a financial adviser to three Presidents of the United States. He is predicting a complete financial meltdown this spring. He predicted the 1998 recession and the ten year later 2008 disaster. He reads signals and understands how and why a collapse will come. He says do not worry about WWIII but prepare yourself for very difficult economic times coupled with famine riots and looting due to extra ordinary homelessness. Do what Warren Buffet Russia and China are doing invest in tangible assets. Silver Gold etcetera. Russia and China have quietly been acquiring gold. When the US dollar busts because they have printed to many well the whole world economy will be in tatters...

Not a very happy new year thought eh? I have known this was coming since the 1980's I just did not know when. My advice and I am no expert get prepared for the worst but hope for the best. If this actually happens Steve
will use it as an excuse to prorogue Parliament permanently. I sure do hope Jim is wrong but having said that I see it coming.

@ Mogs. I've been writing for some years that the modes of organization we've implemented over the past two centuries - economic, industrial, political and social - have led us to the edge of abyss.

Climate change is a symptom. So too are over-population and over-consumption. At 7+ billion people heading to 9-billion and more, we are dependent on the continued supply of resources far in excess of Earth's sustainable capacity.

Economic collapse is inevitable in any system dependent on perpetual exponential growth once consumption exceeds the renewal rate of natural resources. For us that point was reached around 1970 when we hit the 3-billion mark. Ever since then we've been eating our "seed corn." We've more than doubled in population since then even as we swelled our per capita consumption.

I don't know how Rickards has any confidence that we can experience this collapse without war. That alone makes me question his credibility. Bear in mind that an economic collapse won't occur in isolation but will compound every other stressor now building and there are many. It's not something that can be neatly contained.

We've transformed our biosphere into an overtaxed sewer and it's backing up. We can see this from the space station in massive deforestation, spreading desertification, dried up lakes and rivers that no longer run to the sea, algae blooms in our lakes and coastal waters. We're far beyond the Earth's ability to cleanse our waste as it has done so well for 70,000 years or more.

As an aside, one item I'm following is China's initiative to open a rail line right up to the border of India's northernmost state, Arunachal Pradesh. What is China planning to move up there that requires rail access? Indeed what's up there - beside most of the Himalayan headwaters. The Indians are gobsmacked. There are no commercial uses for the Chinese rail line but some very real military purposes.

@ Owen. I so wish you're proven right.

@ The Mound ya I agree we are on an abyss Rickards basically says government won't be able to afford war but hey if all they have to do is push the nuclear button?

Either way we are in for nasty weather. I am glad I am old enough to have experienced enough and traveled enough to have a "level headed" centrist neutral point of view. If it all ends tomorrow [that never happens cause when you wake up in the morn it is today all over again] I personally will die happy knowing what I have seen done and where I've been.+ Positive they can't take that from me.

I love the Earth I love life I just don't like that some are ruining both...

@ Mound again there is another index Rickards has studied along with financial signals. When he was hired as a contractor for the CIA he had an open ended budget and as part of his research he found that there was an increasing 'unhappiness' in the populace that preceded every crash. Well I think we are there be prepared ditch paper such as stocks bonds gold or silver certificates paper money in the bank and get out and put it to something tangible. You have seen it coming too. Now it is literally on the event horizon. No kidding. We are at the far edge of the envelope...