Feeding Europe's Islamophobia (And Our Own?)

Europe's Islamophobes know a good thing when they see it and, according to Der Spiegel, they're making the most of the Charlie Hebdo massacre.

This week's events in France could ultimately pour fuel on the flames of widespread French anxiety about an Islam that many believe is threatening the fabric of the country's very identity along with fears that other radical Islamists might conduct similar attacks. 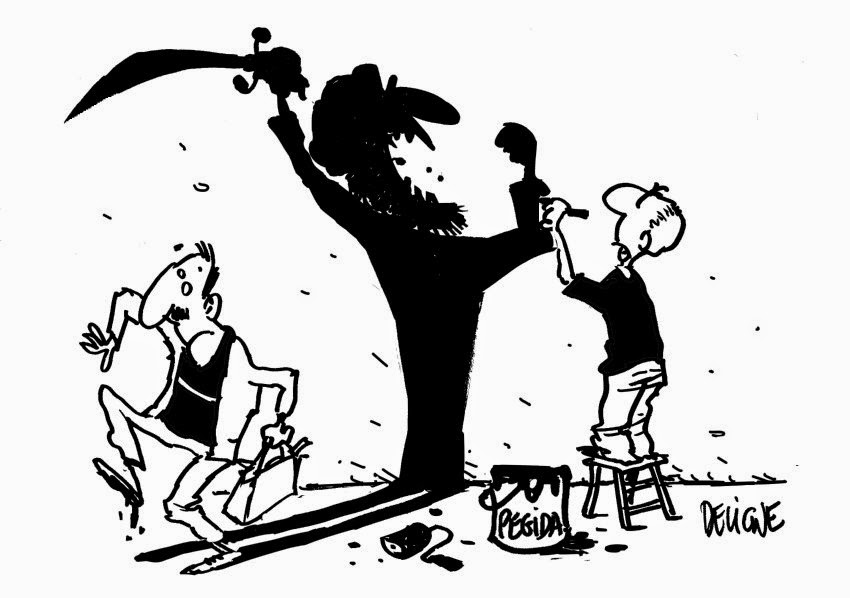 Of course, that applies not only to France, but to the entire Western World, including Germany, which has so far been spared attacks comparable in scale. Nevertheless, Germans too harbor a diffuse fear of Islam, which has been manifesting itself of late on the streets of Dresden in the form of protests held by the loose-knit group calling itself Patriotic Europeans Against the Islamization of the West (Pegida). All over the place, it seems, people incapable of differentiating between Muslims and murderous assassins feel affirmed in their views.

...The debate is raging particularly intensely in France, where Marine Le Pen's Front National has been winning big with voters for years with its Islamophobic messages. Still fresh on the minds of the French is the March 2012 killing spree waged by 23-year-old Mohamed Merah, who hunted down soldiers, Jewish children and their teacher in Toulouse with a handgun and a scooter, killing seven.

...One of Queen Elizabeth II's crowning moments came after the London bombings in 2005. In a remarkable speech, the Queen directed some of her remarks right at terrorists: "Those who perpetrate these brutal acts against innocent people should know that they will not change our way of life."
...There's also a chance France could fall prey to right-wing populists. In a tweet on Thursday, Le Pen reiterated her demand that the country hold a referendum on the death penalty, which is banned in France, a prohibition enshrined in the Charter of Fundamental Rights of the European Union. Le Pen's standing was soaring in public opinion polls even prior to Wednesday's attack. Whether support for her will now rise or fall hinges on how the French public ultimately reacts to the murders.

...The radicalization of French youth is hardly a recent phenomenon. For 15 years, the anthropologist Dounia Bouzar has been studying the issue. She has observed that a growing number of young French have found refuge in religion because, as Bouzar says, "reality no longer offers them a future."

They used to be primarily young men and women from the suburbs who grow up in broken families or orphanages, like the gunman Merah, for example. But the profile has changed. Now, even children from the middle classes are attracted to an absurdly radical form of Islam.

Those who are now doing the killing, Bouzar is convinced, are the little brothers of those who tried hard to succeed, but who were unable to. They used to believe in the Republic and its values and thought that, if only they did well enough in school, they would find a job. But unfortunately things didn't turn out that way: Because they had the wrong names and lived in the wrong part of town. "That engenders hate," says Bouzar.

Dresden okay remember the so-called Pre-NATO Allied "fire bombing" of Dresden in WWII? They have a right to complain the Allies incinerated their city. Ouch.

Now the US UK NATO coalition [no longer call allies] is following suit.

I wonder why Muslim/Islam folks hate us no shit that is the reason why. Bomb Harper says bomb Afghanistan Iraq Libya and now Syria what is next Russia China and Iran?

Harper needs to be slagged and tagged and put in a mental museum for all studying history to see. Got my drift?