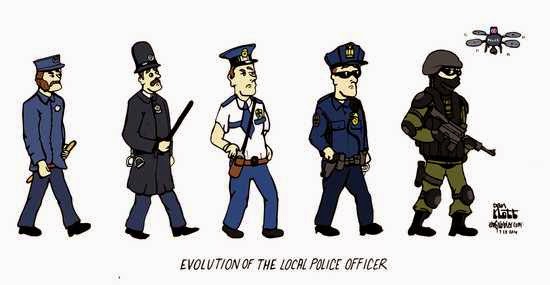 One of the two RCMP officers shot in a casino in St. Albert, Alberta, is not expected to live.  Constable David Wynn was shot in the head and doctors do not believe he will recover from his wound. It reminds us that policing in Canada can be a dangerous job. I suspect that's why we give them body armour, pistols, shotguns, tasers, pepper spray and such.

This being the Year of Our Harper, 2015, the usual suspects have wasted no time jumping on the idling hearse to demand "more protection" for Canada's police officers.  RCMP Commish, Bob "I always get my Duffy" Paulson, questioned how the shooter, Shawn Rhen, was able to get his hands on a gun given his lifetime ban against owning one.  Who knows?  Maybe if we had a gun registry that might be a good place to start looking for answers.  Of course the shooter probably just went into some seedy bar and bought the gun under the table.

More worrisome were the remarks from Captain Former, Kash Heed, the former chief of the West Vancouver police before he moved on to become British Columbia's former solicitor general, who said, “We need to outfit our police officers, give them the tactics, give them the training … to ensure they go home each and every day.”

They're pretty good at couching their remarks but what it seems they're after is something that might wind up looking like the Ferguson, Missouri goon squads. Do we want our cops strolling around with assault rifles?  Will that make them safer? Will it make you safer?

Maybe if this government did a better job at gun control, putting some serious money into intelligence to locate, identify and recover guns circulating through the criminal ranks that would be a good start.  We seem to be doing a good job at generously funding an intelligence operation to keep track of dissidents opposed to pipelines.  Maybe we should take the considerable experience we have amassed on that project and put it to work in a crackdown on illegal firearms.

In the meantime, let's keep this in perspective. Cops die. It's an unfortunate reality in their job.
Posted by The Mound of Sound at 8:56 AM

It's not the job of the police to make anyone safer. Police enforce the law and keep the peace. But they are not responsible for any particular person's safety.

And the top 10 most dangerous jobs are …

I can't find the police on that list. What am I missing?

The usual suspects are politicizing the Alberta shooting. It smells of blaming judges. Are we going to see the Harper crew championing kangaroo courts, a return to capital punishment and dismantling of the Charter of Rights?

I share those same concerns, Toby. It makes me wonder if they'll transform this into some sort of election issue.

Maybe if we had a gun registry that might be a good place to start looking for answers.

I'm gonna do this before my fact-checking, because the point you're trying to make is both wrong, and incredibly stupid. It is however, illustrative and suggests that you're allowing your ideology to inform you, rather than the facts.

Read the first sentence again, and realize how confident I actually am with what I'm about to say next.

You're suggesting that Rehn, the shooter, walked into an Alberta casino brandishing a long-gun. A shotgun, or a rifle, something intended to be operated with both hands at the same time. Now, I don't live in Alberta, but if that were the case, I'm pretty sure the casino staff would have noticed. I don't know that it wasn't a long gun yet, I haven't checked that fact.

Therefore, if, as I suspect, it is determined, and remember, I haven't fact-checked this yet, that it was a handgun well... Handguns are still registered! They have been since the 1930's, and a guy with a lifetime weapons prohibition got one.

And it is you who suggests that vote for the guy with the "evidenced-based policy"? Would you like to rephrase that to say the policy that ignores all the evidence?

Back in a bit.

Quote: Rehn, who was armed with a handgun, was "short and sharp."

Quote: Investigators said Rehn brought a handgun into the casino prior to the shooting.

Quote: And Rehn had a handgun, which is hard to acquire legally even if you don’t have a lifetime ban on possessing a firearm, which Rehn did.

Now, I don't have access to the police documents, but I strongly suspect that we'll learn that Rehn had some manner of handgun. So, why don't we just check the handgun registry? I mean, that'll tell us how he got it right?

Have you seen this yet? http://www.northeastshooters.com/vbulletin/threads/179192-DIY-Shovel-AK-photo-tsunami-warning!

Now, a rational person would probably read these two anecdotes together and quickly determine that the ship of gun control, Canadian style gun control at least, has sailed, and promptly, sank.

Though, this kind of thing does bode a silver-lining for a gun nut like myself: Harper will continue to a significantly larger war-chest than the Liberals. And, thanks to the sheer lunacy on display at places like this, he's probably going to win the next election.

Do keep up the good work! Maybe Harper will thank the progressive bloggers in his victory speech.

Well now....just so much more shxx. Let´s call it what it is. Canada the teenage child of the US.