That Salman Guy, the Saudi King Whose Ass We're Lining Up to Kiss? Brace Yourself. 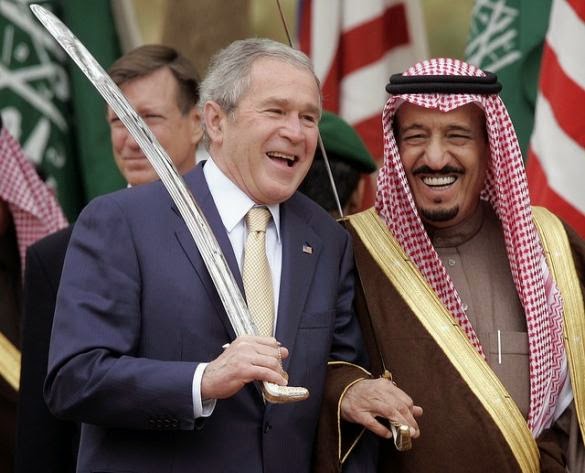 Maybe we should just paint the ISIS logo on those armoured fighting vehicles we're supplying to the Saudis.

An eye-opener in Foreign Policy magazine notes that, far from being the "moderate reformer" as our governments and media portray newly minted Saudi king Salman, he's actually steeped in Sunni extremism.


Salman was appointed by his full brother and close political ally King Fahd to direct the Saudi High Commission for Relief of Bosnia and Herzegovina (SHC) upon its founding in 1992. Through the SHC, Salman gathered donations from the royal family for Balkan relief, supervising the commission until its until its recent closurein 2011. By 2001, the organization had collected around $600 million — nominally for relief and religious purposes, but money that allegedly also went to facilitating arms shipments, despite a U.N. arms embargo on Bosnia and other Yugoslav successor states from 1991 to 1996.

And what kind of supervision did Salman exercise over this international commission? In 2001, NATO forces raided the SHC’s Sarajevo offices, discovering a treasure trove of terrorist materials: before-and-after photographs of al Qaeda attacks, instructions on how to fake U.S. State Department badges, and maps marked to highlight government buildings across Washington.

The Sarajevo raid was not the first piece of evidence that the SHC’s work went far beyond humanitarian aid. Between 1992 and 1995, European officials tracked roughly $120 million in donations from Salman’s personal bank accounts and from the SHC to a Vienna-based Bosnian aid organization named the Third World Relief Agency (TWRA). Although the organization claimed to be focused on providing humanitarian relief, Western intelligence agencies estimated that the TWRA actually spent a majority of its funds arming fighters aligned with the Bosnian government.

...The SHC’s connection to terrorist groups has long been scrutinized by U.S. intelligence officials as well. The U.S. government’s Joint Task Force Guantanamo once included the Saudi High Commission on its list of suspected “terrorist and terrorist support entities.” The Defense Intelligence Agency also once accused the Saudi High Commission of shipping both aid and weapons to Mohamed Farrah Aidid, the al Qaeda-linked Somali warlord depicted as a villain in the movie Black Hawk Down. Somalia was subject to a United Nations arms embargo starting in January 1992.

...Many in the West wish for a Saudi king who will pass meaningful reforms and push back against incitement by local extremists. Sadly, Salman does not look to be that man.

For a better insight into Saudi's shady king, read the entire article here.