But Gosh It Sure Looks Purty 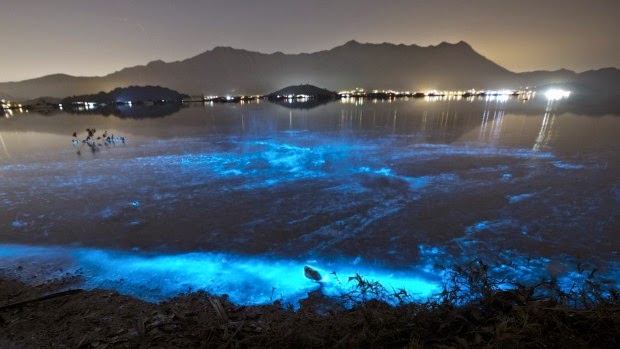 One of the great threats facing mankind discussed at this year's World Economic Forum meeting in Davos is algae blooms triggered by agricultural run off into coastal waters and freshwater lakes and rivers.

Some are red, some are green, but the residents of Hong Kong are being treated to a lovely, glowing blue faux algae this year.

The luminescence is an algal bloom created by Noctiluca scintillans, nicknamed "sea sparkle." When disturbed by currents or waves, the bloom glows. "It looks like algae and can act like algae. But it's not quite," wrote Seth Borenstein of the Associated Press. "Noctiluca is a type of single-cell life that eats plankton and is eaten by other species."

So why is it toxic? Such blooms are caused by farm pollution. "The plankton and Noctiluca become more abundant when nitrogen and phosphorous from farm run-off increase," Borenstein wrote, "Noctiluca'srole as both prey and predator can eventually magnify the accumulation of algae toxins in the food chain."

The beauty of Noctiluca scintillans is lethal. Such is the case in the Arabian Sea, where a biological dead zone the size of Texas is filled with the species. The resulting "emerald swirls" are large enough to been seen from space.

But Noctiluca scintillans can be lethal to plants and animals. Scientists think the dead zone was created when the species killed off native algae and compromised the fish population. Gwynn Guilford of Quartz wrote: "Few animals can survive 'dead zones' of oxygen-poor water. As the scientists discovered, N. scintillans thrives in these conditions…. And once a dead zone sets in, it's hard for the ocean to recover."

Huge, anoxic "dead zones" have become the new normal in the Gulf of Mexico and off the coast of Oregon.  Inland waters are succumbing to algae also.  In 2013, Lake Winnipeg earned top place as the world's most threatened lake.

“Lake Winnipeg is a symbol of a much larger problem”, says Bob Sandford, chair of the Canadian Partnership Initiative in support of the U.N. Water for Life Decade. “It is not just Manitoba that deserves a black-eye for this distinction”, he added. “Recent research demonstrates that the toxic bacteria contributing to the declining health of Lake Winnipeg, has now been detected in 246 water bodies across Canada, at levels exceeding guidelines in every province. That these problems exist right across the country is an issue of national health and environmental concern.”

In August, residents of Toledo faced a ban on tap water use when the city's Lake Erie water supply became contaminated with blue-green algae.  The water ban extended to Pelee Islanders the following month.  Beaches were closed and residents were warned not to swim, bathe or cook in the local water.

Most concerning is the notion that the toxins in these algae blooms can pass from prey to predator and, through the process known as bio-concentration, spread through food chains to the very top.

Daily I am horrified and saddened by this. I just saw
this article in my Facebook feed about the grief scientists feel about climate change. It made me think of you.

Hi, Karen. I read the article and it did touch a nerve. There are moments when I just stop and think that we can't possibly be doing this to ourselves, allowing this to happen - not to us but to our kids and future generations.

Surely it's some form of greed-induced insanity and, as I reluctantly concluded some time ago, climate change is just one of three, perhaps more, symptoms of the greater affliction that imperils life on Earth.

I have hoped for some global epiphany, a planet-wide realization that we have to stop overpopulating, over-consuming and over-emitting.

We're not only consuming our planet's renewable resources at 1.5-times Earth's carrying capacity, we're absolutely dependent on that steadily growing level of consumption. That's accelerating toward the cliff edge.

If we all had to live within the same skin these unsustainable patterns would have been halted a long time ago. But, as the Davos delegates heard last week, we'd rather go to war, compounding mankind's misery and suffering, than accept restraint.

I told my affluent friends about 15-years ago to sink their money into Lockheed. Wish I'd taken my own advice.