Are You Really Going to Bank on Justin and Christia When It Comes to the TPP? Elizabeth Warren Has Some Insights You Might Find Helpful. 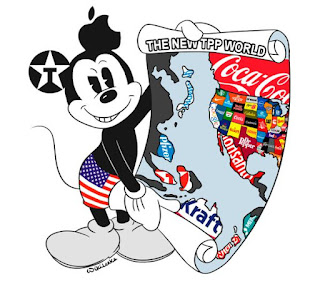 Justin Trudeau and his international trade minister, Christia Freeland, are non-committal when asked whether Canada should sign onto the controversial Trans-Pacific Partnership trade deal. They tell us they're going to mull it over.

Fortunately others, such as Joe Stiglitz, Robert Reich and American senator Elizabeth Warren have already done a load of highly-educated, highly-informed mulling and they're not pulling any punches about what the deal means. Here are some thoughts from senator Warren:

"I urge my colleagues to reject the TPP and stop an agreement that would tilt the playing field even more in favor of big multinational corporations and against working families," Sen. Elizabeth Warren (D-Mass.)said on the U.S. Senate floor on Tuesday. Noting that "most of the TPP's 30 chapters don't even deal with traditional trade issues," she argued, "most of TPP is about letting multinational corporations rig the rules on everything from patent protection to food safety standards—all to benefit themselves."

Now maybe you think that free trade is still "a thing." You might imagine that free trade remains the Ark of the Covenant of free market fundamentalism, the economic mantle of neoliberalism warmly wrapped in the cloak of globalization. After all, free trade is the rising tide that lifts all boats and promises our children an ever better tomorrow, right?

There are some who argue that you've not just had a drink of the KoolAid, you've swallowed the whole bucket.  Among these is John Ralston Saul who, for a decade now, has been convincingly arguing that it's all a put-on. He believes globalization is dead. He sees the entire neoliberal movement as a hollow ideology bordering on a religion replete with idols and High Priests. To Ralston Saul, you've been conned and you're still being conned.

A similar refrain can be had from political economist James K. Galbraith, son of the legendary John K.G.  He contends even the High Priests stopped believing in market fundamentalism long ago. They know it doesn't work, a failed theory at best. They also know, claims Galbraith, that the public has been adequately conditioned to believe in free trade - despite all the evidence to the contrary of its painful failings - that it remains a very useful and effective means of advancing corporatism and, eventually, illiberal democracy. This dovetails neatly with Warren's timely observation that the TPP "is about letting multinational corporations rig the rules on everything from patent protection to food safety standards - all to benefit themselves."

Recently I decided it would be useful to post random passages from James Galbraith's recent book, "The Predator State, How Conservatives Abandoned the Free Market and Why Liberals Should Too." Here's the first instalment, taken from the preface. Galbraith begins by exploring parallels between the Soviet failure in the Chernobyl nuclear disaster and America's failure in the wake of Hurricane Katrina.

...where the Soviet creed was of central planning, ours was its polar opposite, a cult of the free market. And as I charted my way through this book, I came to realize that the relationship between actual policy in the United States and the doctrines of policy is not simple. In uncanny ways, this relationship has come to resemble its counterpart in the old Soviet Union" actual policies were (and are) in no principled way governed by official doctrine. Rather, the doctrine serves as a kind of legitimating myth, something to be repeated to schoolchildren but hardly taken seriously by those on the inside.

What is the purpose of the myth? It serves here, as it did there, mainly as a device for corralling the opposition, restricting the flow of thought, shrinking the sphere of admissible debate. Just as even a lapsed believer kneels in church, respectable opposition demonstrates fealty to the system by asserting allegiance to the governing myth.

...the fundamental public institutions of American economic life were those created by public action in an earlier generation - by Franklin D. Roosevelt in the New Deal and World War II, by London Johnson in the Great Society, and to a degree by Richard Nixon - and that those institutions have, to a large extent, survived to the present day.

But if they have survived, obviously they have not survived undamaged. The catastrophe of Hurricane Katrina pointed to two types of damage. One was an erosion of capability, evinced in this case by the failure by the Army Corps of Engineers to maintain the levees protecting New Orleans. ...This kind of erosion presupposes nothing about intent. It can and does happen simply because of resource constraints, misjudgments, accidents of politics, and history...

But Katrina, and especially the aftermath of the disaster, also illustrated a second and more serious sort of rot in the system. This I will call predation: the systematic abuse of public institutions for private profit, or equivalently, the systemic undermining of public protections for the benefit of private clients. The deformation of the Federal Emergency Management Agency into a dumping ground for cronies under the government of George W. Bush - "Heckuva job, Brownie" - captured the essence of this phenomenon. But so too does the practice of turning regulatory agencies over to business lobbies, the privatization of national security and the attempted privatization of Social Security, the design of initiatives in Medicare to benefit drug companies, and trade agreements to benefit corporate agriculture at the expense of subsistence farmers in the Third World. In each case, what we see is not, in fact, a principled conservative's drive to minimize the state. It is a predator's drive to divert public resources to clients and friends.

The predation of which Galbraith writes is well advanced in the United States. We lag behind but not far enough and we are trending in the same direction. Corporatism does have a powerful hold in Canada and that's something that needs to be beaten back. Embracing the TPP may, and probably will, make that essential, vital task all but impossible. It's our children's Canada we'll be giving away. Nobody, certainly not some guy with a false majority, has the right to do that to us.

Our home-grown corporations (what little is left of them) may not be whole-heartedly behind the TPP. Jim Balsillie, for instance, has not been happy about the IP and investor-dispute provisions of the TPP.

The branch-plants certainly would be behind the TPP though. Canada is increasingly an american-multinational branch-plant economy.

But I'm not yet convinced about arguments that the TPP would be a major good thing, or a major bad thing.

The Canadian problem with corporate investment seems to be relatively independent of trade policy. Even if there is some effect from the TPP, there is risk of scapegoating it, even while other underlying problems do not get solved.

If the government does go ahead with the TPP, I hope it develops a clear plan, with plenty of government support, to get investment in Canadian corporate R&D at the levels of our competitors.

If Justin signs the TPP its over. We never shoud have killed the NEP and signed free trade with Mexico. This is so fucking obvious that not one national newspaper can report this fact.

cf are you a paid lobbyist, working for the money

ISDS is in all these so-called trade deals. I assume fear of massive lawsuits under ISDS hinders governments from legislating in the best interests of the nation.

TransCanada suing the US over the cancellation of the Keystone XL pipeline under ISDS in NAFTA is an example. And Eli Lilly is suing Canada for $500 million under NAFTA as well.

@ Chris - most of the informed commentary on TPP suggests a state of "government capture" in which the remedies you suggest will be foreclosed, perhaps perpetually.

Is this not the situation most needing the "precautionary principle"? Fully explore the bounds and limitations of the pact. Explain to the citizenry what they're supposedly getting and giving up in exchange.

A supportive review in the Globe contended the question is not what TPP will do to benefit Canada but the detrimental consequences that will descend upon us if we reject it. That sounds utterly extortionate, hardly confidence building.

Hugh, I think ISDS is more than a deterrent, a fetter on national sovereignty. It is a shackle that dictates a surrender of critical incidents of state sovereignty, bending the knee to corporatism.

Lungta - I pray you're wrong but I do so unconvincingly.

I'm reading that no Canadian economic assessment of the TPP has been done. Huh?

I agree with Lungta this is an acid test. Maybe the grassroots progressives in the libs believe that this will not be signed but as an old cynic that believes that Butts et al, are only placeholders for the "Old Lib Philosophy" and Bay St. (Whatever is left of it) this signing is a done deal. It is only a question of how to con us into believing the Trudeau 'really doesn't like it but what choice do we have?'

Over 3 million people in Europe have signed a petition against the TTIP, which also has ISDS:

They're not crazy about ISDS provisions allowing foreign corporations to sue their governments, I guess.


I'm not buying that "what choice do we have" nonsense. Whether it's used in response to IMF demands or one purportedly "free" trade deal or another, this modern day Sword of Damocles has been hauled out far too often to cow nations and peoples.

I think it was Malaysia that stood up to the IMF and told them where to put their demands. It turned out that the dire warnings of economic doom were a bluff and Malaysia did just fine.

I don't believe it's too late, not yet, to revisit this whole neoliberal House of Cards, strip away the myths and present it for what it really is. Show what the dreamers imagined it would be versus what it has become, this predatory economic monster that has surrendered state sovereignty to multinationals and effected the greatest unearned transfer of wealth out of the middle classes to the wealthiest and, by implication, most powerful.

The process begins by explaining to the public that there's nothing remotely "free" in free trade. Perhaps we should better refer to it as "indentured trade."

The ISDS does not just allow companies to by pass our laws and sue our government it's unconstitutional and a complete violation of Canadians rights under The Charter of Rights and Freedoms. In short our already fragile sovereignty will be destroyed. What's to mull over? How ironic would that be. The father Pierre Trudeau creates a constitutuon protecting all Canadians rights, the very entity that prevented the tyrant Harper from passing uncontitutional legislation. Out of 44 pieces of legislation sent to the SCC 43 were struck down by the SCC as being unconstitutional! Is the son Justin Trudeau, really going to ratify a deal that gives corporations not laws the control of the country, making the Charter of Rights and Freedom insignificant? This should be fought against with everything we have, including legally. It is our government. It is our country.

Canada will have the full text of the tpp when they get their butts in gear:
http://www.international.gc.ca/trade-agreements-accords-commerciaux/agr-acc/tpp-ptp/final_agreement-accord_finale.aspx?lang=eng