Are We Spoiling For a Fight? 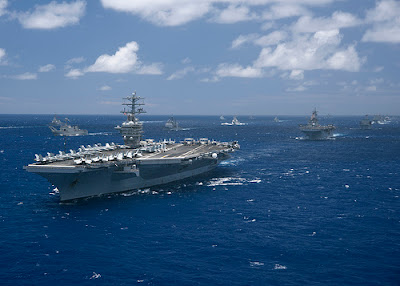 Yesterday it was CSIS egging the Canadian government on with dire warnings that Vlad Putin was mobilizing Russian forces and war could be imminent.

Today comes word that the US Navy's Third Fleet, its eastern Pacific/home waters navy, is sailing for China's marine backyard, the East and South China Seas.

The Third Fleet, based in San Diego, California, traditionally has confined its operations to the eastern side of the Pacific Ocean's international dateline.

Japan's Nikkei Asian Review quoted the commander of the U.S. Pacific Fleet, Admiral Scott Swift, as saying on Tuesday that the move came in the "context of uncertainty and angst in the region," an apparent reference to China's behavior.

Swift argued that the Navy should utilize the "total combined power" of the 140,000 sailors, over 200 ships and 1,200 aircraft that make up the Pacific Fleet.

The Seventh Fleet consists of an aircraft carrier strike group, 80 other vessels and 140 aircraft. The Third Fleet has more than 100 vessels, including four aircraft carriers.

"This is real. The commitment of the 3rd Fleet [operating] forward is real," Swift said, pointing out that the deployment engages the entire Pacific command's 140,000-sailors, 200 ships and 1,200 aircraft.

NATO supporting the US in provoking Russia and China are playing a very dangerous game. I can't believe the gall of the MSM calling Russia the agressor. Canada is sounding like it wants to join in! Our new PM, should go back and read some of his fathers books on foreign policy and while he is at it, he should read some Pearson.


Pamela, I have lamented the passing of the era of great statesmen. Now more than ever their absence is felt.

I am still lamenting Mound. I have taken to watching videos on Youtube on speeches and interviews from Pierre Trudeau, Pearson, JFK, Laurier and other great statesmen. I am so desperate to hear or read from or about an intelligent political leader, I have turned to political history for any inspiration. Modern day writers like Saul, Hedges, Chomsky and many others have helped me enormously to understand the bigger picture and I am eternally grateful for these independent thinkers. But I have to stop this inspirational search. Thank goodness for blogs like this one. They are sometimes an intellectual refuge for me. My touch stone to knowledgeable, intelligent people who genuinely care about politically and culturally what is happening to the world.

With ISIS and Al Queda exposed, we need a new threat.

There are those such as Andrew Bacevich who see this perpetual bellicosity as an inevitable incident of the new American militarism - today's military/industrial/neoconservative/evangelical/commercial warfighting complex. In his book on America's new militarism he records his Eisenhower's military/industrial complex expanded to become less responsive to the state's needs and focused instead on its own expansion and prosperity leading to the evolution of today's "Perma-War." The commercial warfighting element is perhaps the most chilling yet in Afghanistan today contractors outnumber American military personnel 3-1. Commercial undertakings of that magnitude are dependent on continuation which, in this case, means constant conflict. Once established they become an important, nearly critical, component of the overall economy. They join the economic establishment alongside the major defence industries such as Raytheon, General Dynamics, Boeing.