What Do Bill Maher and Donald Trump Have in Common? 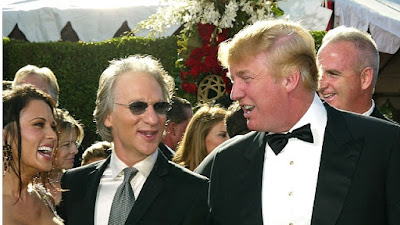 
Speaking after “appreciating the congrats” on the Orlando shootings, Donald Trump again insisted that what mowed people down at Pulse was not an assault rifle but radical Islam, because in Trump Tower, it cannot be both. Trump’s world is binary. It is zero-sum: Either guns kill people or radical Islam kills people. In that world, only one religion can be bad, and so Christianity is good and Islam is bad. Christianity is peaceful and Islam violent. Christianity is tolerant and Islam intolerant. Both are inherently one thing or the other, immutable blueprints etched in stone for the behavior of their respective adherents.

This is a worldview that is shared by people who are Trump supporters and not Trump supporters. In the secular vernacular, we might call this view “Manichean,” that is, a binary between light and darkness, good and evil.

...I am tired of hearing, from Bill Maher and from Donald Trump, that Islam is inherently violent. I am even more tired of hearing that Christianity is inherently peaceful. I have witnessed this debate play out many times over, including at one dinner party when Laura Ingraham turned to the other guests and took a poll: Raise your hands if you think Islam is a death cult. Most of the (politically conservative) guests raised their hands and then took pains to explain to me how, unlike Islam, Christianity is inherently a religion of love.

...Conservatives roll their eyes when you mention the Crusades — oh, that old thing? — and I’m sure they will when they see the reference to the Manicheans, but they both matter, especially if you’re trying to argue that religions have inherent characteristics.

The Crusades are still a sore subject in the Muslim world, but it’s easy to forget the havoc they wreaked on the Jews of Europe. Time after time, as Crusaders slogged southeast on their umpteenth trip to the Holy Land, they slaughtered the Jews in their path. They herded them into synagogues and set the buildings alight. The Crusaders killed so many Jews in the name of their Christian faith that it was the most stunning demographic blow to European Jewry until the Holocaust. Which, just a friendly reminder, happened in Christian, civilized Europe only 70-some years ago.

And if you don’t believe me about the brutal repression of Manichean Christians, you can read about it here in the Catholic Encyclopedia (a publication that “chronicles what Catholic artists, educators, poets, scientists and men of action have achieved in their several provinces”). The Christian Church was ruthless with people whose faith was in any way a deviation from the canon, torturing and burning heretics at the stake. After Martin Luther pinned his theses to a church door, unintentionally spawning a new wing of Christianity, it led to hundreds of years of on-and-off religious warfare between Christians, spilling each other’s blood in the fervent belief that their vision of Christ was the truest. And it’s not ancient history: Violence between Protestants and Catholics continued in Christian Ireland until the very end of the 20th century.

...There are so many historical examples I could mention — Christians killing Jews because they blamed them for the plague; the fact that the word “ghetto” comes from the enclosures in which Jews were forced to live in medieval Venice; the pogroms in which the Russian Orthodox Church encouraged their flocks to kill the non-believing Jews. If that’s too far back in time for you, consider July 1988, the thousandth anniversary of the baptism of Russia: Rumors flew in Moscow that there would be a pogrom to celebrate the day Christianity came to Russia, and that the police were handing out addresses of Jews to the public. (That’s when my family decided to flee Holy Rus.)

Ioffe got a barrage of anti-Semitism from The Donald's Trumpeteers in the wake of an expose on Melania Trump in GQ. Really, really vile stuff. As for the gays:

Watching Trump and the Christian right go after Islam for being homophobic is, frankly, jaw-dropping. If any community in this country has shown itself to be anti-gay, it is conservative Christians and their decades of peddling hatred for gay people, comparing homosexuality to pedophilia and bestiality, claiming AIDS is divine punishment, pushing “cures” for homosexuality, and blocking laws that prevent gays not just from marrying but from being discriminated against. A Christian pastor, who has enjoyed the company of Bobby Jindal, Mike Huckabee, and Ted Cruz, recentlysaid that, according to the Bible, homosexuals “deserve the death penalty.” Now the very same people who, just last month, were comparing trans people to predators who would use the wrong bathroom to hunt for child victims are suddenly lining up to defend gays from radical Islam.

...Friday will mark the one-year anniversary of Dylann Roof killing nine people in the middle of a Bible study in Charleston, S.C. Before his rampage, he wrote a manifesto declaring his allegiance to the white supremacist cause and pointing to the Council of Conservative Citizens, which claims to adhere to “Christian beliefs and values,” as a major source of information and inspiration. By some accounts, Roof came from a church-going family and attended Christian summer camp. Did Roof kill his fellow Christians because he was deranged or because Christianity is violent?”

Popes at one time had their own armies. The Catholic church ruled for 2000 yrs. It was called the dark ages.

First I thought BM was a dick. Then I thought he was cool. Now he's a dick again. This time he stays in the "dick" column.

BTW, anyone who thinks Christianity is a peaceful religion is either ignorant of history or Christianity.

Muslim history shines in comparison to Christian history. They carried on with the development of civilization after the fall of the Roman Empire in the West. They made great progress in math, science, engineering and architecture.

Northern European barbarians were able to capture superior science and technology allowing them to conquer and colonize the globe. But it didn't make them any less barbarian.

Muslims only started acting crazy after the West invaded Iran by proxy in 1953 and botched the creation of the state of Israel. They were basically forced to bunker down into social conservatism to draw enough strength to drive out the occupiers.

Just think of how these couple of corrupt geopolitical plays made such a mess of the world. And then the idiots doubled down on a direct invasion of Iraq. OMFG.

Hummmm! The suggestion of culling half the worlds population ought to begin with these kinds of people mentioned here....the kind that enjoy making money from war, the injured and the dead. The kind that delight in talking about their wonderful vacations in gated communities.